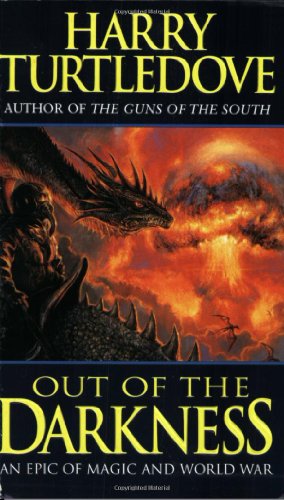 Out of the Darkness
by Harry Turtledove

In Stock
£26.99
As the forces of Algarve, Unkerlant, and their allies prepare for the final epic battle to determine the winner of the Derlavaian War, the battle-weary people struggle to deal with their individual challenges and tragedies, in the climactic conclusion of the Darkness series. Reprint.
Well Read
Only 1 left

Out of the Darkness Summary

Out of the Darkness by Harry Turtledove

THE CLIMACTIC CONCLUSION OF A WORLD WAR
As the Derlavian War rages into its last and greatest battles, allied nations maneuver for advantage over one another in the postwar world. But before that time can come, the forces of Algarve, Unkerlant, and their allies must clash a final time, countering army with army and battle magic with ever-more-powerful battle magic.
In the midst of it all, the people the war has battered and reshaped must struggle to face their greatest individual challenges, as loves are shattered and found, terrible crimes avenged...and some journeys end forever.
Nor will the end of war bring lasting peace...

Out of the Darkness Reviews

"Turtledove has proved he can divert his readers to astonishing places...I know I'd follow his imagination almost anywhere."
--"San Jose Mercury News"

"The author's ability to convey complex abstract issues through strong characterizations sweeps this complicated narrative along ... and he succeeds especially well at portraying inner conflicts caused by hate and pride."
--"Publishers Weekly "on "Out of the Darkness"

"Magic and technology provide the trappings for an all too human tale of courage amid chaos.... a good choice for fans of military fantasy."
--"Library Journal "on "Out of the Darkness"

"Turtledove skillfully handles the fates of a cast in whose ranks many readers have found friends."
--"Booklist "on "Out of the Darkness""The strongest yet in the series...Long but ultimately compelling, this book augurs well for the last volume and underscores Turtledove's astonishingly fertile imagination."
--"Publishers Weekly" (starred review) on "Jaws of Darkness"
"Turtledove is almost certainly unique in reconceiving World War II in magical fantasy terms and on an immense scale--so far, completely successfully."
--"Booklist" (starred review) on "Darkness Descending"

Harry Turtledove is the Hugo-winning author of many SF and fantasy novels. His alternate-history novels, include the bestselling "The Guns of the South, How Few Remain, " the Worldwar series, and the recent" Ruled Britannia." He lives with his wife and daughters in Los Angeles.

GOR009946203
Out of the Darkness by Harry Turtledove
Harry Turtledove
Used - Well Read
Paperback
St Martin's Press
2005-06-01
672
0765343622
9780765343628
N/A
Book picture is for illustrative purposes only, actual binding, cover or edition may vary.
This is a used book. We do our best to provide good quality books for you to read, but there is no escaping the fact that it has been owned and read by someone else previously. Therefore it will show signs of wear and may be an ex library book.