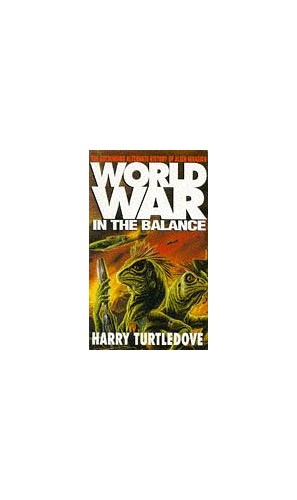 Worldwar: In the Balance
by Harry Turtledove

In Stock
£4.99
What would happen if the Earth had been invaded by aliens at the height of World War II? This is the first volume of the Worldwar saga, which continues with the Colonization trilogy and ends with Homeward Bound.
Very Good Good Well Read
Only 3 left

Worldwar: In the Balance Summary

Worldwar: In the Balance by Harry Turtledove

World War II seethes across the planet. Hostilities spread in ever-widening circles of destruction: Nazi Germany, Soviet Russia, Britain, France, Japan, Italy Africa - the fate of the world hung in the balance.
Then the real enemy arrives. Out of the skies comes an invasion force the like of which Earth has never known - and worldwar is truly joined. The invaders are inhuman and they are unstoppable. Their weaponry is overwhelming and their goal is simple: Fleetlord Atvar has arrived to claim Earth for the Empire.

Worldwar: In the Balance Reviews

GOR001218468
Worldwar: In the Balance by Harry Turtledove
Harry Turtledove
Used - Very Good
Paperback
Hodder & Stoughton General Division
1994-11-03
672
0340618396
9780340618394
N/A
Book picture is for illustrative purposes only, actual binding, cover or edition may vary.
This is a used book - there is no escaping the fact it has been read by someone else and it will show signs of wear and previous use. Overall we expect it to be in very good condition, but if you are not entirely satisfied please get in touch with us.