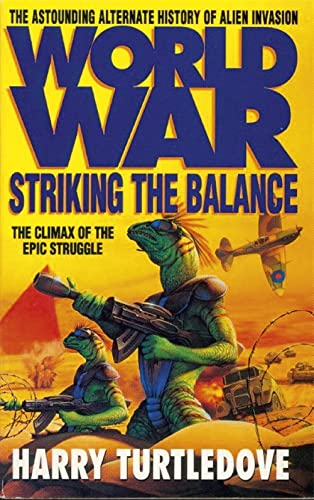 In Stock
£5.99
What would happen if the Earth had been invaded by aliens at the height of World War II? This is the fourth and final volume of the Worldwar saga, which continues with the Colonization trilogy and ends with Homeward Bound.
Good Well Read
Only 3 left

When alien beings armed with devastatingly superior military technology and bent on conquest invaded earth, Allied and Axis forces were already engaged in a bloody conflict - the Second World War - that spanned the whole globe. Suddenly, humans had to stop fighting each other and unite against this deadly new enemy from beyond the Solar System.

From China to North Africa, from hit-and-run cavalry raids in the American West to tank clashes in Eastern Europe, the worldwide conflict raged. Now battlefield defeats, supply shortages, guerrilla warfare in their occupied territories, rebellion within their own ranks and atomic attacks forced the alien leaders to rethink drastically their strategy and tactics. Was it going to be necessary to destroy Earth in order to save it . . . ?

GOR001159705
Worldwar: Striking the Balance by Harry Turtledove
Harry Turtledove
Used - Good
Paperback
Hodder & Stoughton General Division
1997-08-21
528
0340684917
9780340684917
N/A
Book picture is for illustrative purposes only, actual binding, cover or edition may vary.
This is a used book - there is no escaping the fact it has been read by someone else and it will show signs of wear and previous use. Overall we expect it to be in very good condition, but if you are not entirely satisfied please get in touch with us.