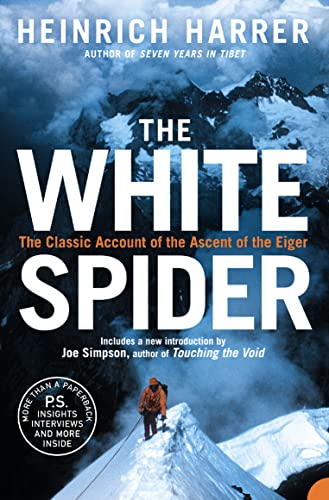 The White Spider
by Heinrich Harrer

A classic of mountaineering literature, this is the story of the harrowing first ascent of the North Face of the Eiger, the most legendary and terrifying climb in history.

The White Spider by Heinrich Harrer

A classic of mountaineering literature, this is the story of the harrowing first ascent of the North Face of the Eiger, the most legendary and terrifying climb in history.

Heinrich Harrer, author of `Seven Years in Tibet' and one of the twentieth century's greatest mountaineers, was part of the team that finally conquered the Eiger's fearsome North Face in 1938. It was a landmark expedition that pitted the explorers against treacherous conditions and the limits of human endurance, and which many have since tried - and failed - to emulate.

Armed with an intimate knowledge that comes only from first-hand experience of climbing the Eiger, Harrer gives a gripping account of physical daring and mental resilience. A new introduction by Joe Simpson, author of `Touching the Void', confirms the lasting relevance of this true adventure classic.

`An outstanding book in the mountaineering library.' Guardian

`Even to look at the photographs of the terrible slopes of the Eiger chills the blood. Heinrich Harrer enables the reader to vicariously experience the cold and the terror of the climb.' Irish Press

`"The White Spider" provides almost the classic statement of the weird and frequently misunderstood psychology of the modern rock-climber. Despite the grimness of much of what he is doing, Harrer communicates the irresistible joy of climbing as an antidote to the idea that climbers are masochistically trying to prove something to themselves.' Sunday Times

`A true classic from the early days of mountaineering...The terror and respect that the Eiger inspires is evoked superbly in Harrer's narrative.' Maxim

Heinrich Harrer was born in 1912 in Carinthia. His skiing prowess won him a place in the 1936 Austrian Olympic team. He was imprisoned by the British in India during the Second World War, but escaped and travelled to Tibet, a story he recounts in the classic Seven Years in Tibet. He died in 2006.

GOR001218292
The White Spider by Heinrich Harrer
Heinrich Harrer
Used - Very Good
Paperback
HarperCollins Publishers
2005-01-17
336
0007197845
9780007197842
N/A
Book picture is for illustrative purposes only, actual binding, cover or edition may vary.
This is a used book - there is no escaping the fact it has been read by someone else and it will show signs of wear and previous use. Overall we expect it to be in very good condition, but if you are not entirely satisfied please get in touch with us.