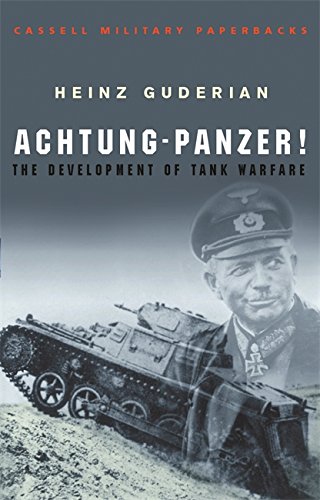 In Stock
£5.99
This is the defining book on the theory and practise of tank warfare, by the man who became one of Hitler's most able generals.
Like New Very Good Good
Only 4 left

This is one of the most significant military books of the twentieth century. By an outstanding soldier of independent mind, it pushed forward the evolution of land warfare and was directly responsible for German armoured supremacy in the early years of the Second World War.

Published in 1937, the result of 15 years of careful study since his days on the German General Staff in the First World War, Achtung Panzer! argues how vital the proper use of tanks and supporting armoured vehicles would be in the conduct of a future war. When that war came, just two years later, he proved it, leading his Panzers with distinction in the Polish, French and Russian campaigns. Panzer warfare had come of age, exactly as he had forecast.This first English translation of Heinz Guderian's classic book - used as a textbook by Panzer officers in the war - has an introduction and extensive background notes by the modern English historian Paul Harris.

Born in 1888, Heinz Guderian served in World War One, came to Hitler's attention in 1935, was made corps commander of Panzer troops and promoted to General in 1938. His tanks were greatly successful in the invasions of Poland and France and, perceived as pro-Nazi, Guderian was much in favour. However, when the Russian invasion failed in the winter of 1941, Guderian was forced to resign, not to regain his position until 1944, when the war was all but lost. He died in Bavaria in 1954.

GOR010499636
Achtung Panzer! by Heinz Guderian
Heinz Guderian
Cassell Military Paperbacks
Used - Like New
Paperback
Orion Publishing Co
1999-09-16
240
0304352853
9780304352852
N/A
Book picture is for illustrative purposes only, actual binding, cover or edition may vary.
The book has been read, but looks new. The book cover has no visible wear, and the dust jacket is included if applicable. No missing or damaged pages, no tears, possible very minimal creasing, no underlining or highlighting of text, and no writing in the margins.