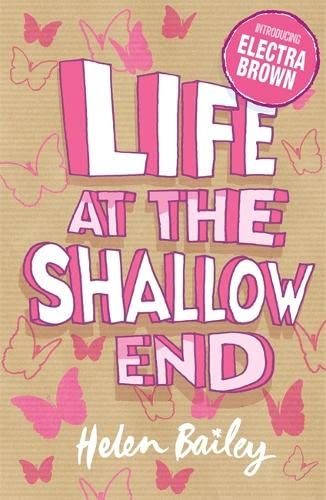 Electra Brown: Life at the Shallow End
by Helen Bailey

In Stock
£3.99
Electra Brown is a deliciously funny new character, with the humour of Louise Rennison and the edge of Gossip Girl.
Very Good Good
8 in stock

Electra's family is falling apart. Her dad's moving out, her mum's given in to her daytime TV addiction, and her little brother (aka The Little Runt) has just been caught shoplifting. Even the guinea-pig's gone mental.

And all Electra can think about is whether green eyeliner compliments or clashes with blue eyes.

Where can a girl turn in her hour of need? To her best friends, of course. Together, they think up a plan: persuading the class geek to stalk her dad seemed like a good idea at the time ...

Helen Bailey was born and brought up in Northumberland, a county she always regarded as home.

Barely into her teens, Helen invested her pocket money in buying a copy of The Writers' and Artists' Yearbook and spent the next few years sending short stories and poems to anyone she could think of. Much to her surprise, she sometimes found herself in print.

After a degree in science, Helen worked in the media, running a successful London-based character licensing agency handling internationally renowned properties such as Snoopy, Felicity Wishes, Dilbert and Zorro.

Helen died in 2016, leaving behind a significant body of work. She is best known for her Electra Brown series, of which the first is 'Life in the Shallow End'.

GOR000451433
Electra Brown: Life at the Shallow End: Book 1 by Helen Bailey
Helen Bailey
Electra Brown
Used - Very Good
Paperback
Hachette Children's Group
2008-05-01
304
0340945389
9780340945384
N/A
Book picture is for illustrative purposes only, actual binding, cover or edition may vary.
This is a used book - there is no escaping the fact it has been read by someone else and it will show signs of wear and previous use. Overall we expect it to be in very good condition, but if you are not entirely satisfied please get in touch with us.