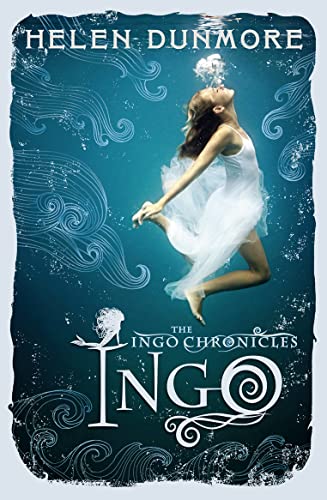 Stunning reissue, in beautiful new cover-look, of this magical and award-winning novel - the first of the spellbinding Ingo Chronicles...

Stunning reissue, in beautiful new cover-look, of this magical and award-winning novel - the first of the spellbinding Ingo Chronicles...

Once there was a man who fell in love with a mermaid. He swam down into the sea to be with her, and was never seen again...

Sapphire's father told her that story when she was little. When he is lost at sea she can't help but think of that old myth: she's convinced he's still alive.

Then, the following summer, Sapphy meets Faro, an enigmatic and intriguing Mer boy. Diving down into Ingo, she discovers a world she never knew existed, where she must let go of all her Air thoughts and embrace the sea...

But not only is Sapphy intoxicated by the Mer world, she longs to see her father once more. And she's sure she can hear him singing across the water:

"I wish I was away in Ingo
Far across the briny sea..."

"As ever, Dunmore's characters are beautifully drawn... Though the first in a series, this book works perfectly as a standalone title, with a satisfying resolution but enough left hanging in the air to make the characters and situations live on in the reader's mind. Ingo has a haunting, dangerous beauty all of its own." Philip Ardagh, Guardian

"The electric thrill of swimming with dolphins, of racing along currents, and of leaving the world of reason and caution behind are described with glorious intensity." Amanda Craig, The Times

"Helen Dunmore may have a few drowned readers on her conscience, so enticing and believable is the underwater world she creates in Ingo." Telegraph

"Helen Dunmore is an exceptional and versatile writer and she writes with a restrained, sensual grace." Observer

"An enchanting, modern twist on the Hans Christian Anderson story of the little mermaid... The marine imagery gives the story a wonderful sprinkling of the nautical and the magical." Telegraph

Helen Dunmore was an award-winning novelist, poet and children's writer, who will be remembered for the wisdom, lyricism, compassion and immersive beauty of her writing. In her lifetime, she published eight collections of poetry, many novels for both adults and children, and two collections of short stories. She won the Orange Prize for Fiction with her novel A Spell of Winter, her novel The Siege was shortlisted for the Orange Prize and the Whitbread Prize for Fiction, and her final poetry collection Inside the Wave won the 2017 Costa Book of the Year.

GOR004712653
Ingo (The Ingo Chronicles, Book 1) by Helen Dunmore
Helen Dunmore
The Ingo Chronicles
Used - Very Good
Paperback
HarperCollins Publishers
2012-07-05
336
000746410X
9780007464104
N/A
Book picture is for illustrative purposes only, actual binding, cover or edition may vary.
This is a used book - there is no escaping the fact it has been read by someone else and it will show signs of wear and previous use. Overall we expect it to be in very good condition, but if you are not entirely satisfied please get in touch with us.