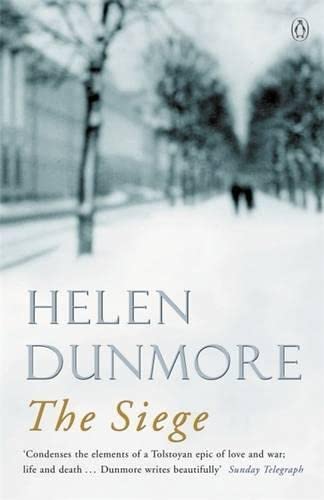 The Siege
by Helen Dunmore

In Stock
£3.59
Leningrad, September 1941. German tanks surround the city, imprisoning those who live there. The besieged people of Leningrad face shells, starvation and the Russian winter. Interweaving two love affairs in two generations, this novel draws us into the Levin's family struggle to stay alive.
Very Good Good
21 in stock

The Siege by Helen Dunmore

Leningrad, September 1941. German tanks surround the city, imprisoning those who live there. The besieged people of Leningrad face shells, starvation, and the Russian winter. Interweaving two love affairs in two generations, THE SIEGE draws us deep into the Levin's family struggle to stay alive during this terrible winter. It is a story about war and the wounds it inflicts on people's lives. It is also a lyrical and deeply moving celebration of love, life and survival.

A Tolstoyan epic of love and war; life and death...she writes beautifully * Sunday Telegraph *
Remarkable, affecting...there are few more interesting stories than this; and few writers who could have told it better * Rachel Cusk, Daily Telegraph *
Utterly convincing. A deeply moving account of two love stories in terrible circumstances. The story of their struggle to survive appears simple, as all great literature should...A world-class novel * Antony Beevor, The Times *
Literary writing of the highest order set against a background of suffering so intimately reconstructed it is hard to believe that Dunmore was not there * Sunday Telegraph *
A remarkable parable of human survival against the odds * Mail on Sunday *
In this wise, humane and beautifully written novel she has written a masterpiece * Independent *
A searing historical novel. Dunmore vividly evokes the unbelievable cold, privations and violence as people struggle to survive...an extraordinary description of the horrors of the time * Sunday Express *
An important as well as a thrilling work of art * Independent on Sunday *
A moving and powerful novel in which Dunmore employs all her celebrated descriptive and narrative skills...beautiful * Daily Mail *
A harrowing, urgent narrative of cold, starvation and the battle to survive * Sunday Times *

Helen Dunmore has published six novels with Viking and Penguin: ZENNOR IN DARKNESS, which won the McKitterick Prize; BURNING BRIGHT; A SPELL OF WINTER, which won the Orange Prize; TALKING TO DEAD; YOUR BLUE-EYED BOY; and WITH YOUR HEART CROOKED HEART. She is also a poet, children's novelist and short-story writer; her two collections of short stories, LOVE OF FAT MEN and ICE CREAM, are also published by Viking and Penguin. She lives in Bristol.

GOR000365109
The Siege by Helen Dunmore
Helen Dunmore
Used - Very Good
Paperback
Penguin Books Ltd
2002-05-30
304
0141000732
9780141000732
Short-listed for Orange Prize for Fiction 2002 Short-listed for Orange Prize 2002 Short-listed for Whitbread Prize (Novel) 2001
Book picture is for illustrative purposes only, actual binding, cover or edition may vary.
This is a used book - there is no escaping the fact it has been read by someone else and it will show signs of wear and previous use. Overall we expect it to be in very good condition, but if you are not entirely satisfied please get in touch with us.