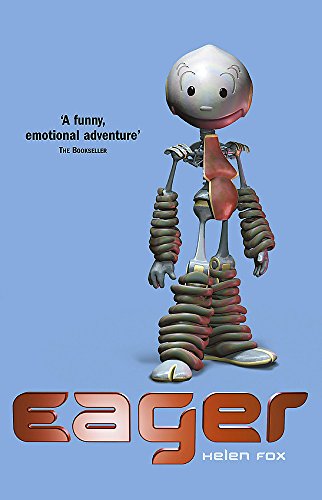 In Stock
£3.99
Eager is the Bell's friendly and child-like family robot. In this funny and touching novel, set in the near future, Eager tries to learn what it means to be human.
Very Good
Only 2 left

It is later this century, and the earth's natural resources have been rationed for use by technocrats. Now LifeCorp, a global company, makes all major decisions and robots do most of the work. Life otherwise is much as we know it (except that your house talks to you and the kettle asks you how many cups of tea you want).

When the Bell family's much-loved old-fashioned robot butler Grumps starts to go wrong, Mr Bell finds EGR3 through a colleague. But EGR3, known as Eager, is something different - programmed to learn through his experiences, like a human child. He also feels wonder, excitement - and confusion; not least a sense of awe at the latest, glamorous BDC4 robots, flaunted by the families of the powerful and wealthy technocrats. And he feels sorrow at the loss of Grumps, destroyed under strange circumstances.

Then Gavin begins to think there is something odd about the BDC4s behaviour. With his sister Fleur, he investigates, enlisting Eager's help - with hilarious consequences. Questions are asked of LifeCorp and of Eager's creator and the answer to all the puzzles is finally solved. It leaves only the final question to be answered - the one closest to Eager's heart: am I alive?

Original and well paced * Books For keeps *
A romping, futuristic, conspiracy theory mystery ... a gripping read * School Librarian *
A funny, emotional adventure for Luddites everywhere * The Bookseller *
Hilarious * Parents News *
It was very inspiring and made me think a lot about the future -- William Howarth, aged 10 * Redhouse Catalogue *
His constant quest to discover what it means to be alive is both poignant and captivating ... a lot of thought has gone into the writing of this book and it reaps rewards * Ink *
This clever story takes a look at what we mean by intelligence ... A thoughtful book for older readers * Bookfest 2004 - 2005 *
A futuristic fantasy that'll have you eager for more * tBkmag Spring 2007 *
Science fiction with a heart * Publishing News *
A terrific read, full of fascinating ideas * Farnborough Mail *
A rewarding longer read, which offers an original new slant on fantasy * Northern Echo *
Interesting and fun to read * cool-reads.co.uk *
A funny, emotional adventure * The bookseller *
Poignant end captivating. * Ink *
Unlike many authors who create a future which sounds distinctly unappealing, Helen Fox has come up with . . . a refreshingly different combination of humans and mechanicals for the 10s-plus. * Newbury Weekly News *
A thoughtful book for older readers. * Bookfest 2004 *

Helen Fox lives in London with her husband, who is a scientist. Before she became a writer she worked as a primary teacher, a marketing executive, and a tour guide. She trained and worked as an actress, and during this time rediscovered her love of creating stories. Helen has now given herself over to writing full-time. Eager is her first novel and she is already working on the sequel.

GOR000663935
Eager by Helen Fox
Helen Fox
Eager
Used - Very Good
Paperback
Hachette Children's Group
2004-06-17
304
0340875836
9780340875834
N/A
Book picture is for illustrative purposes only, actual binding, cover or edition may vary.
This is a used book - there is no escaping the fact it has been read by someone else and it will show signs of wear and previous use. Overall we expect it to be in very good condition, but if you are not entirely satisfied please get in touch with us.