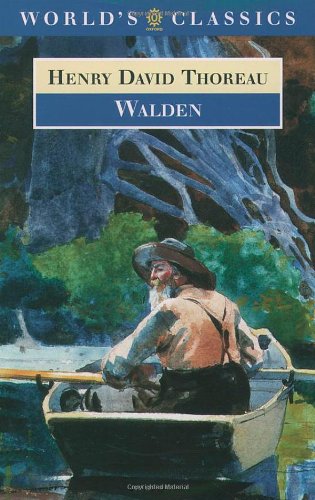 In Stock
£5.99
In 1845, Henry Thoreau left his home in Concord, Massachusetts to begin a new life alone, in a self-built rough hut on the shore of Walden Pond. This is his own account of his experiment in solitary living, and also includes consideration of the author's thinking in the context of his birthplace.
Very Good Well Read
Only 1 left

'The mass of men lead lives of quiet desperation' In 1845 Henry David Thoreau left his home town of Concord, Massachusetts to begin a new life alone, in a rough hut he built himself a mile and a half away on the north-west shore of Walden Pond. Walden is Thoreau's classic autobiographical account of this experiment in solitary living, his refusal to play by the rules of hard work and the accumulation of wealth and above all the freedom it gave him to adapt his living to the natural world around him. This new edition of Walden traces the sources of Thoreau's reading and thinking and considers the author in the context of his birthplace and his sense of its history - social, economic and natural. In addition, an ecological appendix provides modern identifications of the myriad plants and animals to which Thoreau gave increasingly close attention as he became acclimatized to his life in the woods by Walden Pond.

Stephen Allen Fender is Professor of American Studies and Director of the Graduate Research Centre in the Humanities, School of English and American Studies at the University of Sussex. His books include Plotting the Golden West: American Literature and the Rhetoric of the California Trail and Sea Changes: British Emigration and American Literature.
Henry David Thoreau was born in Concord, Massachusetts in 1817 and is known for his extreme individualism, his preference for simple, austere living, and revolt against the demands of society and government. His other works are A Week on the Concord and Merrimack Rivers (1849), Civil Disobedience (1849), Excursions, (1863) and The Maine Woods (1864).

GOR001214233
Walden by Henry David Thoreau
Henry David Thoreau
World's Classics
Used - Very Good
Paperback
Oxford University Press
1999-08-12
426
0192839217
9780192839213
N/A
Book picture is for illustrative purposes only, actual binding, cover or edition may vary.
This is a used book - there is no escaping the fact it has been read by someone else and it will show signs of wear and previous use. Overall we expect it to be in very good condition, but if you are not entirely satisfied please get in touch with us.