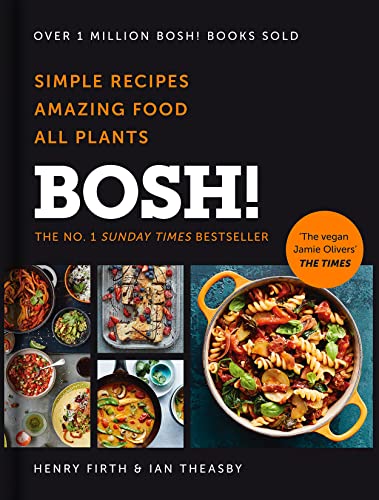 Out of Stock
£7.49
Lifestyle Non-Fiction Book of the Year 2019 As seen on ITV's Living on the Veg 'The vegan Jamie Olivers' The Times
Like New
Only 0 left

Lifestyle Non-Fiction Book of the Year 2019 As seen on ITV's Living on the Veg 'The vegan Jamie Olivers' The Times Want to cook ridiculously good plant-based food from scratch but have no idea where to start? With over 140 incredibly easy and outrageously tasty all plants meals, BOSH! The Cookbook will be your guide.

Henry Firth and Ian Theasby, creators of the world's biggest and fastest-growing plant-based platform, BOSH!, are the new faces of the food revolution.

Their online channels have over 2.3 million fans and constantly inspire people to cook ultra-tasty & super simple recipes at home. Always ensuring they stick to fresh, supermarket-friendly ingredients, BOSH! truly is "plant-based food for everyone".

The book is jam-packed with fun, unpretentious and mega satisfying recipes, including Creamy Mac and Greens, Burrito Samosas, the Big Bhaji Burger, the World's Best Pesto Lasagne, Satay Sweet Potato BOSH! Bowl, Spanish Beach Churros, Gooey PBJ Brownies and Salted Caramel Chocolate Crunch Tart, all easy enough to be rustled up any night of the week. It's enough to convince the staunchest of carnivores to give plants a whirl.

Whether you're already sold on the plant-based lifestyle or you simply want to incorporate more meat, dairy and egg-free meals into your week, BOSH! The Cookbook is your plant-based bible.

"A really great cookbook with over 140 recipes to use every day."
HAIRY BIKERS

'A fantatic vegan cookbook with easy, delicious recipes that will have everyone forgetting it's vegan. From clean-eating crowdpleasers to the most indulgent vegan junk food, this cookbook is great for vegan newbies and veterans alike.' Glamour UK Online

"I love the BOSH! boys, their energy and their totally original,
exciting approach to simple, tasty plant-based food."
ANNA JONES, author of A Modern Way to Eat

GOR009073686
BOSH! by Henry Firth
Henry Firth
Used - Like New
Hardback
HarperCollins Publishers
2018-04-19
288
000826290X
9780008262907
N/A
Book picture is for illustrative purposes only, actual binding, cover or edition may vary.
The book has been read, but looks new. The book cover has no visible wear, and the dust jacket is included if applicable. No missing or damaged pages, no tears, possible very minimal creasing, no underlining or highlighting of text, and no writing in the margins.