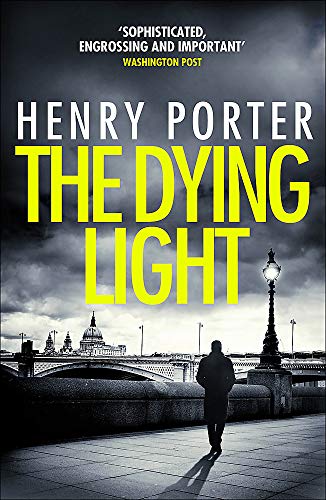 The Dying Light
by Henry Porter

At the funeral the bells of the church were rung open rather than half-muffled, as is usual for the dead. Kate Lockhart has come, along with corporate leaders, ministers and intelligence chiefs, to a beautiful town in the Welsh Marches to mourn her soul mate, David Eyam, the brightest government servant of his generation. All that remains of Eyam are the burnt fragments of a man killed far from home in a horrific explosion.

Eyam has left a devastating legacy which certain people at the funeral are desperate to suppress - but Kate Lockhart is equal to Eyam's legacy. She becomes the focus of the state's paranoiac power and leads the local resistance to it, directed from beyond the grave by Eyam.

And the state is no match for the genius of the dead...

An incredibly prescient thriller set in the aftermath of the Snowden news story from the bestselling author of Brandenburg.

Henry Porter was a regular columnist for the Observer and now writes about European power and politics for The Hive website in the US. He has written several bestselling thrillers, including Brandenburg, which won the CWA Ian Fleming Steel Dagger, A Spy's Life and Empire State, which were both nominated for the same award. He is also the author of the Paul Samson spy thrillers: Firefly, which won the 2019 Wilbur Smith Adventure Writing Prize, and White Hot Silence. Henry Porter is frequently described as the heir to John le Carre. He lives in London.

GOR010206109
The Dying Light: Terrifyingly plausible surveillance thriller from an espionage master by Henry Porter
Henry Porter
Used - Very Good
Paperback
Quercus Publishing
2019-05-28
496
1787479471
9781787479470
N/A
Book picture is for illustrative purposes only, actual binding, cover or edition may vary.
This is a used book - there is no escaping the fact it has been read by someone else and it will show signs of wear and previous use. Overall we expect it to be in very good condition, but if you are not entirely satisfied please get in touch with us.