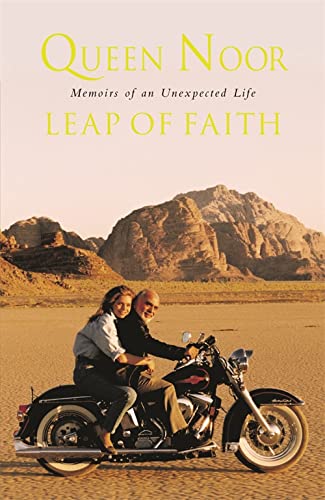 A Leap of Faith by Her Majesty Queen Noor

The dramatic and inspiring story of one woman's incredible journey into the heart of a man and his nation.

A Leap of Faith: Memoir of an Unexpected Life by Her Majesty Queen Noor

The dramatic and inspiring story of one woman's incredible journey into the heart of a man and his nation.

Born into a distinguished Arab-American family, Lisa Halaby was a strongly independent young woman. After studying architecture at Princeton, her work on projects in the Middle East gave her a profound understanding both of the links between the environment and social problems, and also of the tumultuous history of the Arab nations.

Then, in 1974, her life took a very different turn, when her father introduced her to the world's most eligible bachelor, King Hussein of Jordan. After a whirlwind romance, she became Noor Al Hussein, Queen of Jordan.

With eloquence and honesty, Queen Noor speaks of the obstacles she faced as a young bride and of her successful struggle to create a role for herself as a humanitarian activist. She tells of her heartbreaking miscarriage and the births of her four children, along with her continuing support for King Hussein's campaign to bring peace to the Arab nations. But most of all this is a love story - an honest and engaging portrait of a truly remarkable woman and the man she married.

Here she tells the story of her life as a young royal bride, her humanitarian work, her miscarriage and the births of her four children. Above all she describes her abiding love for her husband who died in 1999. * SUNDAY TRIBUNE *
Queen Noor was born in the USA, living in New York, California and Washington before going to university at Princeton, where she joined the first freshman class to accept women. She majored in architecture and urban planning. After graduating she worked in Australia, Iran and Jordan before meeting King Hussein. With sons educated in England (one trained as a soldier at Sandhurst), Queen Noor now divides her time between the UK, Jordan and New York.
GOR001131816
9780753817568
075381756X
A Leap of Faith: Memoir of an Unexpected Life by Her Majesty Queen Noor
Her Majesty Queen Noor
Used - Very Good
Paperback
Orion Publishing Co
2004-03-04
480
N/A
Book picture is for illustrative purposes only, actual binding, cover or edition may vary.
This is a used book - there is no escaping the fact it has been read by someone else and it will show signs of wear and previous use. Overall we expect it to be in very good condition, but if you are not entirely satisfied please get in touch with us
Trustpilot