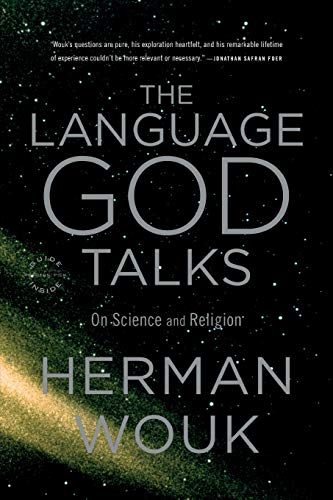 The Language God Talks: On Science and Religion by Herman Wouk

"More years ago than I care to reckon up, I met Richard Feynman." So begins Herman Wouk's trenchant and exhilarating book on navigating the divide between science and religion.

Told by Feynman in that first meeting that he must learn "the language God talks"-calculus-Wouk set in motion the lifelong inquiry that has culminated in this rich, compact volume. Wouk draws on stories from his own life, on key events from the twentieth century, and on encounters not just with Feynman but with other masters of science and religion to address the eternal questions of why we are here, what purpose faith serves, and how scientific facts fit into the picture.

"As engaging as [Wouk's] megaselling historical novels."--Booklist
"Herman Wouk is one of the wisest men I have ever known. In aviation the best information comes from pilots themselves, in airplanes, not from air-traffic controllers or meteorologists on the ground, in some big air-conditioned office. In The Language God Talks, Herman sends us all a most valuable pilot report."--Jimmy Buffett, Vanity Fair
"Wouk is a great storyteller, and his anecdotes about meeting with brilliant thinkers such as Feynman are entertaining. With Wouk's conversational writing style and humble approach to his subject, The Language God Talks is a fun, intellectually engaging book."--Doug Childers, Richmond-Times Dispatch
"A kind of compact philosophical autobiography and a unique opportunity for readers to glimpse the innermost musings and intimate experiences that prepared Wouk for the many books that he has bestowed upon us."--The Jewish Journal
"The Language God Talks is a seminal read. In this book there is a true to life drama: It is Wouk himself, torn between two worlds, and reconciling them both."--Lee Chottiner, The Jewish Chronicle
"Wouk's questions are pure, his exploration heartfelt, and his remarkable lifetime of experience couldn't be more relevant or necessary."--Jonathan Safran Foer
"In a crowded book market filled with self-serving and redundant theories about humankind's place in the grand scheme, it is rare to encounter an original, honest, charming voice. Such is the case with Wouk's latest work....Wouk's humility, humor and insight make the book a joy to read and a wonder to contemplate...Authentic, accessible prose mixed with real insight."--Kirkus Reviews
"The Language God Talks is simply and wonderfully an old and gifted writer's fascinating look back on a world that, for 94 years, he has called home."--Seed Magazine
"A short, satisfying read. Wouk's writing is so captivating, still as elegant as ever. It demonstrates that Wouk hasn't lost a whit of his storytelling genius."--Dinesh Ramde, Associated Press
"In this book, as in his previous ones, whenever Herman Wouk speaks of God it is always with both exquisite curiosity and warmth."--Elie Wiesel
"A stunning rumination on life's important questions by a masterful storyteller."--Marisha Pessl, author of Special Topics in Calamity Physics

Herman Wouk's acclaimed books include The Will to Live On, This Is My God, Pulitzer Prize winner The Caine Mutiny, The Winds of War, and War and Remembrance.

GOR009951850
The Language God Talks: On Science and Religion by Herman Wouk
Herman Wouk
Used - Very Good
Paperback
Little, Brown & Company
2011-05-30
183
0316078441
9780316078443
N/A
Book picture is for illustrative purposes only, actual binding, cover or edition may vary.
This is a used book - there is no escaping the fact it has been read by someone else and it will show signs of wear and previous use. Overall we expect it to be in very good condition, but if you are not entirely satisfied please get in touch with us.