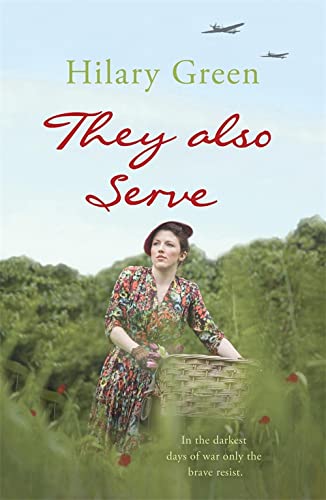 They Also Serve
by Hilary Green

In Stock
£2.39
The exciting, moving and evocative sequel to NOW IS THE HOUR, continuing the stories of four friends during World War Two.
Very Good
7 in stock

They Also Serve by Hilary Green

January, 1941. Dark days for Britain, standing alone against the menace of Nazi Germany, and for four friends fighting their own personal battles . . .
When Rose Taylor receives two proposals on New Year's Eve she has to face an agonising choice that threatens to separate her from all those she loves.

Meanwhile, Richard Stephens has to come to terms with his shattered dream - the only thing that sustained him through the chaos of Dunkirk and the long months on the run as an escaped prisoner of war.

For beautiful Felix, badly burned when his Spitfire was shot down in flames, there is the prospect of weeks of painful surgery, watched by his anguished lover. But as the months go by each of them finds the courage to face danger. For it lurks on every side . . .

'A bitter sweet romantic drama' * Good Book Guide title included in the yearly round-up *
'An unforgettable saga of love and loss in wartime' * Good Book Guide on NOW IS THE HOUR *
Compelling * Publishing News on WE'LL MEET AGAIN *
'Green's book is a delightful and heady mix of romantic ingredients - spies, high-kicking dancers, forbidden love and friendship in the face of death. Who could ask for anything more?' * Lancashire Evening Post on NOW IS THE HOUR, the first in the Follies series *

Hilary Green is a trained actress and spent many years teaching drama and running a youth theatre company. Her main claim to fame for this stage of her life is that she was the drama teacher who gave Daniel Craig, the new OO7, his early experience. She has also written scripts for BBC Radio and won the Kythira short story prize. Hilary now lives in the Wirral and is a full-time writer.

GOR001112041
They Also Serve by Hilary Green
Hilary Green
Used - Very Good
Paperback
Hodder & Stoughton General Division
2007-11-29
352
0340898992
9780340898994
N/A
Book picture is for illustrative purposes only, actual binding, cover or edition may vary.
This is a used book - there is no escaping the fact it has been read by someone else and it will show signs of wear and previous use. Overall we expect it to be in very good condition, but if you are not entirely satisfied please get in touch with us.