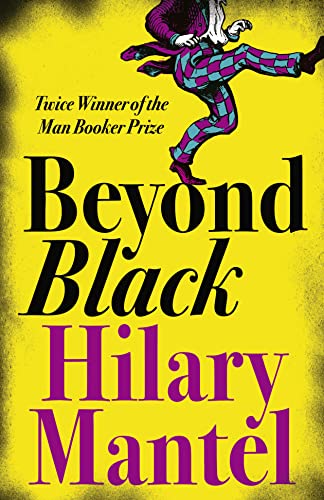 Beyond Black
by Hilary Mantel

A comically sinister tale of wicked spirits and suburban mediums from the Man Booker Prize-winning author of Wolf Hall, Bring Up the Bodies and The Mirror & the Light.

Beyond Black by Hilary Mantel

A comically sinister tale of wicked spirits and suburban mediums from the Man Booker Prize-winning author of Wolf Hall, Bring Up the Bodies and The Mirror & the Light.

Alison Hart, a medium by trade, tours the dormitory towns of London's orbital ring road with her flint-hearted sidekick, Colette, passing on messages from beloved dead ancestors. But behind her plump, smiling persona hides a desperate woman: she knows the terrors the next life holds but must conceal them from her wide-eyed clients. At the same time she is plagued by spirits from her own past, who infiltrate her body and home, becoming stronger and nastier the more she resists...

Shortlisted for the Orange Prize, Hilary Mantel's supremely suspenseful novel is a masterpiece of dark humour and even darker secrets.

'Magnificent...It's one of the greatest ghost stories in the language, but it's far more than just a ghost story - it's a novel of desperate truthfulness - a majestic work, truly.' Philip Pullman

'As black as a tar barrel and very, very funny.' The Times

'Laceratingly observant, a masterpiece of wit, heavy with atmosphere. It is also gloriously insolent and slyly funny: full of robust, uncluttered prose and searing moments.' Independent

'Pins elusive Middle England to the page in all its creepiness: a place blank and disconnected, yet fatally self-absorbed.' Rachel Cooke, Observer

'An elegant, atmospheric tale and a nuanced portrait, full of ironies.' Tatler

'Hilary Mantel has done something extraordinary. She has taken the ethereal halfway house between heaven and hell, between the living and the dead, and nailed it on the page.' Fay Weldon, Guardian

'Has the kind of gallows humour that makes you laugh out loud...A real page-turner, a darkly humorous take on the enduring effects of childhood trauma.' Mslexia

GOR000436941
Beyond Black by Hilary Mantel
Hilary Mantel
Used - Very Good
Paperback
HarperCollins Publishers
2005-10-03
480
0007157762
9780007157761
Short-listed for Orange Prize 2006
Book picture is for illustrative purposes only, actual binding, cover or edition may vary.
This is a used book - there is no escaping the fact it has been read by someone else and it will show signs of wear and previous use. Overall we expect it to be in very good condition, but if you are not entirely satisfied please get in touch with us.