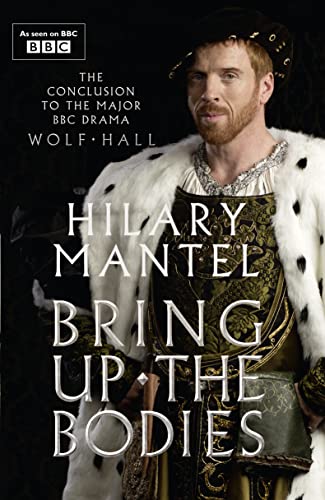 Bring Up the Bodies
by Hilary Mantel

Bring Up the Bodies Summary

'Simply exceptional...I envy anyone who hasn't yet read it' Daily Mail

'A gripping story of tumbling fury and terror' Independent on Sunday

With this historic win for 'Bring Up the Bodies', Hilary Mantel becomes the first British author and the first woman to be awarded two Man Booker Prizes (her first was for 'Wolf Hall' in 2009).

An astounding literary accomplishment, 'Bring Up the Bodies' is the story of this most terrifying moment of history, by one of our greatest living novelists.

Customer Reviews - Bring Up the Bodies

Bring Up the Bodies Reviews

'"Bring Up the Bodies" is simply exceptional...I envy anyone who hasn't yet read it' Sandra Parsons, Daily Mail

'A gripping story of tumbling fury and terror' Philip Hensher, Independent on Sunday

GOR006428968
Bring Up the Bodies (The Wolf Hall Trilogy) by Hilary Mantel
Hilary Mantel
The Wolf Hall Trilogy
Used - Very Good
Paperback
HarperCollins Publishers
2015-01-01
432
0008126437
9780008126438
N/A
Book picture is for illustrative purposes only, actual binding, cover or edition may vary.
This is a used book - there is no escaping the fact it has been read by someone else and it will show signs of wear and previous use. Overall we expect it to be in very good condition, but if you are not entirely satisfied please get in touch with us.