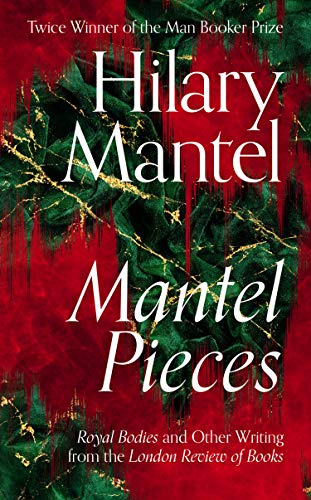 A stunning collection of essays and memoir from twice Booker Prize winner and international bestseller Hilary Mantel, author of The Mirror and the Light

Mantel Pieces: Royal Bodies and Other Writing from the London Review of Books by Hilary Mantel

A stunning collection of essays and memoir from twice Booker Prize winner and international bestseller Hilary Mantel, author of The Mirror and the Light

In 1987, when Hilary Mantel was first published in the London Review of Books, she wrote to the editor, Karl Miller, 'I have no critical training whatsoever, so I am forced to be more brisk and breezy than scholarly.' This collection of twenty reviews, essays and pieces of memoir from the next three decades, tells the story of what happened next.

Her subjects range far and wide: Robespierre and Danton, the Hite report, Saudi Arabia where she lived for four years in the 1980s, the Bulger case, John Osborne, the Virgin Mary as well as the pop icon Madonna, a brilliant examination of Helen Duncan, Britain's last witch. There are essays about Jane Boleyn, Charles Brandon, Christopher Marlowe and Margaret Pole, which display the astonishing insight into the Tudor mind we are familiar with from the bestselling Wolf Hall Trilogy. Her famous lecture, 'Royal Bodies', which caused a media frenzy, explores the place of royal women in society and our imagination. Here too are some of her LRB diaries, including her first meeting with her stepfather and a confrontation with a circus strongman.

Constantly illuminating, always penetrating and often very funny, interleaved with letters and other ephemera gathered from the archive, Mantel Pieces is an irresistible selection from one of our greatest living writers.

'It shows the evolution in Mantel's style, which has been considerable. Some of the pieces are segments of memoir, some are deeply informed historical essays loosely attached to discussions of books. In the earliest reviews - before she is given subjects big enough for her to walk around in - Mantel is sarky and snarky as well as brisk and breezy ... Mantel's own segments of memoir, which were published as diary pieces, are virtuoso performances ... As a memoirist, Mantel is without parallel ... It is only when her essays are laid out like this that we can see the inside of Mantel's huge head, bulging with knowledge and a million connections. 5/5 STARS' Telegraph

'Vast and various, the book offers the reader a fascinating vision of the restless intelligence that has sustained and entertained so many. But it also functions as a heartening example of the rewards to be found in being undogmatic, curious, alert, roaming ... this is a work that is brisk and breezy, and further enhanced by her capacity to examine our hearts, register our feelings, and bring up with tenderness the enduring question of our frail and vulnerable bodies' Evening Standard

'Worth buying for the title pun alone, Mantel Pieces brings together three decades' worth of Hilary Mantel's criticism in the London Review of Books ... her uncomplicated prose style is no less authorative for being highly readable' Sunday Times

Hilary Mantel is one of Britain's most accomplished, acclaimed and garlanded writers. She is the author of fifteen books, including A Place of Greater Safety, Beyond Black, and the memoir Giving Up the Ghost. Wolf Hall and Bring Up the Bodies have both been awarded The Man Booker Prize. The conclusion to The Wolf Hall Trilogy, The Mirror & the Light, was published in 2020.

NGR9780008429973
Mantel Pieces: Royal Bodies and Other Writing from the London Review of Books by Hilary Mantel
Hilary Mantel
New
Hardback
HarperCollins Publishers
2020-10-01
352
0008429979
9780008429973
N/A
Book picture is for illustrative purposes only, actual binding, cover or edition may vary.
This is a new book - be the first to read this copy. With untouched pages and a perfect binding, your brand new copy is ready to be opened for the first time.