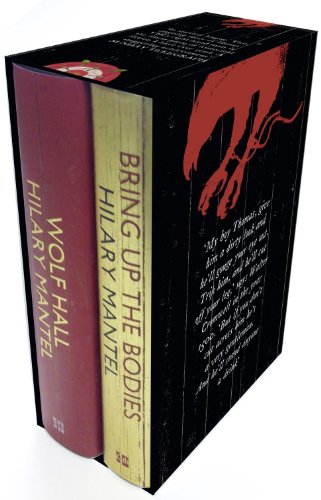 Wolf Hall and Bring Up the Bodies
by Hilary Mantel

This elegantly presented double-hardback slipcased set is available for a limited time only. The perfect gift for any book lover.

Wolf Hall and Bring Up the Bodies Summary

Wolf Hall and Bring Up the Bodies by Hilary Mantel

This elegantly presented double-hardback slipcased set is available for a limited time only. The perfect gift for any book lover.

Customer Reviews - Wolf Hall and Bring Up the Bodies

Wolf Hall and Bring Up the Bodies Reviews

'Wonderful. As soon as I opened this book I was gripped. I read it almost non-stop' The Times

Praise for BRING UP THE BODIES:

'BRING UP THE BODIES is simply exceptional...I envy anyone who hasn't yet read it' Sandra Parsons, Daily Mail

'BRING UP THE BODIES succeeds brilliantly in every particle...it's an imaginative achievement to exhaust superlatives' Spectator

'WOLF HALL was a tour de force, but its sequel is leaner, more brilliant, more shocking than its predecessor' Erica Wagner, The Times

GOR007139366
Wolf Hall and Bring Up the Bodies by Hilary Mantel
Hilary Mantel
Used - Very Good
Hardback
HarperCollins Publishers
2012-12-06
672
0007513577
9780007513574
N/A
Book picture is for illustrative purposes only, actual binding, cover or edition may vary.
This is a used book - there is no escaping the fact it has been read by someone else and it will show signs of wear and previous use. Overall we expect it to be in very good condition, but if you are not entirely satisfied please get in touch with us.