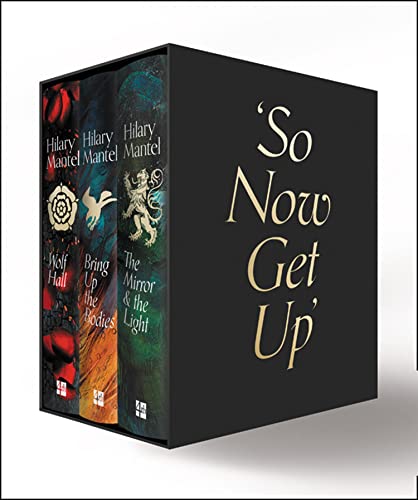 A boxed set of hardback editions of the bestselling and award winning trilogy: Wolf Hall, Bring Up the Bodies and The Mirror & the Light

Hilary Mantel's Wolf Hall Trilogy - Wolf Hall, Bring Up the Bodies and The Mirror & the Light - traces the life of Thomas Cromwell, the boy from nowhere who climbs to the heights of power in Henry VIII's Tudor England. It offers a defining portrait of predator and prey, of a ferocious contest between present and past, between royal will and a common man's vision: of a modern nation making itself through conflict, passion and courage.

'The greatest English novels of this century' Observer

'Mantel has taken us to the dark heart of history ... and what a show' The Times

'A masterpiece that will keep yielding its riches' Guardian

'Beautifully written and terrifying fiction. She makes that world so concrete you can smell the rain-drenched wool cloaks and feel the sharp fibres of rushes underfoot. It's a world of marvels' Daily Telegraph

'As soon as I opened this book I was gripped. I read it almost non-stop. When I did have to put it down, I was full of regret the story was over, a regret I still feel' The Times

Praise for Bring Up the Bodies:

'In another league. This ongoing story of Henry VIII's right-hand man is the finest piece of historical fiction I have ever read . . . A staggering achievement' Sunday Telegraph

Praise for The Mirror and the Light:

'Hilary Mantel has written an epic of English history that does what the Aeneid did for the Romans and War and Peace for the Russians. We are lucky to have it.' Sunday Telegraph

'Very few writers manage not just to excavate the sedimented remains of the past, but bring them up again into the light and air so that they shine brightly once more before us. Hilary Mantel has done just that.' Simon Schama, Financial Times

'A masterpiece that will keep yielding its riches, changing as its readers change, going forward with us into the future' Guardian

Hilary Mantel is the author of fifteen books, including A PLACE OF GREATER SAFETY, BEYOND BLACK, the memoir GIVING UP THE GHOST, and the short-story collection THE ASSASSINATION OF MARGARET THATCHER. WOLF HALL and BRING UP THE BODIES have both been awarded the Man Booker Prize.