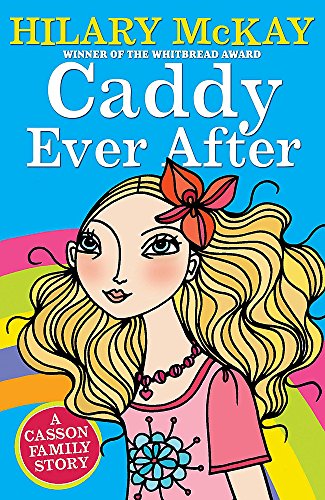 Caddy Ever After
by Hilary McKay

In Stock
£3.99
The fourth book following the crazy antics of the loveable and chaotic Casson family, told in Hilary McKay's inimitable light and witty humour. This time every Casson has a story to tell ...
Very Good Good
Only 1 left

Caddy Ever After Summary

Caddy Ever After: Book 4 by Hilary McKay

It's Valentines Day and everything's changing in the Casson household.

Indigo sets out to do something special to win over Sarah and ends up organising the Valentines Day disco and playing cupid. Saffy has a strange new boyfriend who teaches her all about the stars. Sarah falls very ill - when she can no longer laugh it off Saffy gets scared. And Caddy has fallen in love and is getting married ... but not to Michael.

With a wedding to plan everything's a little crazier than usual in the Casson household. Especially as the only one who seems to be happy for Caddy is Bill.

But it's Permanent Rose who's taking the news the hardest. She made a BIG promise to Michael - how is she going to keep it now?

Caddy Ever After Reviews

'Hilary McKay's wittily observed portrayals of family life are full of warmth, vitality and irrepressible good humour.' * Kate Agnew, The Guardian *
'just the sort of crazy family you ache to be a part of.' * The Good Book Guide *
'it's wonderful to have more stories about the engaging and uncommon Casson family!' * Parents Express *
'... we are so fond of this fresh, funny, foolish, wise, real family.' * The Horn Book Magazine *
'... as wild and endearing as ever ... Another charmer for Casson fans.' * Booklist *
'... laced with warmth, humor and adventures' * Kirkus *
'... touching and hiarious. Beautifully crafted descriptive language makes this offering a real gem.' * School Library Journal *
'Quirky and endearing' * Palo Alto Weekly *
McKay has a genius for domestic comedy. * The Sunday Times *
Hilary McKay's strength lies in her understanding of young people and her ability to evoke them very simply. * The Guardian *
'More entrancing stories about the quirky Casson family from a well-regarded novelist.' * Carousel *
Eccentric, likeable and entirely credible, their domestic exchanges reflect Hilary McKay's exceptional ear for dialogue. * The Times *
A charming story ... McKay writes with such art. * The Independent *
'Warm and witty' * FT magazine *

Hilary McKay won the Guardian Children`s Award with her first novel, The Exiles. Her subsequent work has achieved similar recognition - The Exiles at Home won the Smarties Prize and Saffy`s Angel won the Whitbread. A graduate of Botany and Zoology from St Andrews University, Hilary now writes full-time. She lives in Derbyshire with her husband and two children.

GOR001203772
Caddy Ever After: Book 4 by Hilary McKay
Hilary McKay
Casson Family
Used - Very Good
Paperback
Hachette Children's Group
2006-09-23
224
0340903155
9780340903155
N/A
Book picture is for illustrative purposes only, actual binding, cover or edition may vary.
This is a used book - there is no escaping the fact it has been read by someone else and it will show signs of wear and previous use. Overall we expect it to be in very good condition, but if you are not entirely satisfied please get in touch with us.