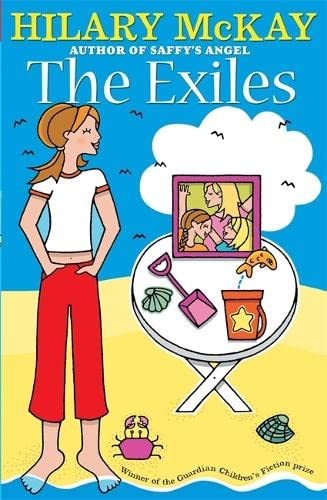 The Exiles: The Exiles
by Hilary McKay

In Stock
£5.99
From fishing in buckets to bone-collecting, the four Conroy sisters are determined to have fun, even when they are staying with strict Big Grandma! Winner of the Guardian Children's Award and first in the highly acclaimed EXILES series.
Very Good
Only 2 left

The Exiles: The Exiles Summary

The Exiles: The Exiles by Hilary McKay

Winner of the Guardian Children's Award and first in the highly acclaimed EXILES series.

The Conroys are no ordinary family. For a start, they don't have a television. Nor are they allowed to keep pets. And Mr and Mrs Conroy never take their daughters - Ruth, Naomi, Rachel and Phoebe - on holiday.

But then Mr and Mrs Conroy inherit GBP5000, and, to their daughters' dismay, decide to spend it redecorating the house over the summer. So the girls are packed off to Big Grandma's house for the holidays, where lots of chores and horribly long walks await them.

At first it seems as though Big Grandma is determined to put a stop to any fun. But, being Conroys, the girls soon find novel ways to entertain themselves, and start having as many adventures and mishaps as usual . . . and after a while, even Big Grandma doesn't seem so bad . . .

The Exiles: The Exiles Reviews

'I can't think of a girl aged between eight and eighteen who wouldn't enjoy this little gem of a book.' * Jill Murphy, The Bookbag *
'The characters are beautifully developed ... recorded with such humour and sensitivity that it is an engrossing, sometimes laugh-out-loud story.' * Write Away *
McKay has created a boisterous, chaotic family which always makes me want to rush out and adopt three sisters. * TES *

* Kate Agnew, The Guardian *
McKay has a genius for domestic comedy. * The Sunday Times *
Hilary McKay's strength lies in her understanding of young people and her ability to evoke them very simply. * The Guardian *

Hilary McKay won the Guardian Children`s Award with her first novel, The Exiles. Her subsequent work has achieved similar recognition - The Exiles at Home won the Smarties Prize and Saffy`s Angel won the Whitbread. A graduate of Botany and Zoology from St Andrews University, Hilary now writes full-time. She lives in Derbyshire with her husband and two children.

GOR001040491
The Exiles: The Exiles by Hilary McKay
Hilary McKay
The Exiles
Used - Very Good
Paperback
Hachette Children's Group
2007-09-01
192
034095051X
9780340950517
N/A
Book picture is for illustrative purposes only, actual binding, cover or edition may vary.
This is a used book - there is no escaping the fact it has been read by someone else and it will show signs of wear and previous use. Overall we expect it to be in very good condition, but if you are not entirely satisfied please get in touch with us.