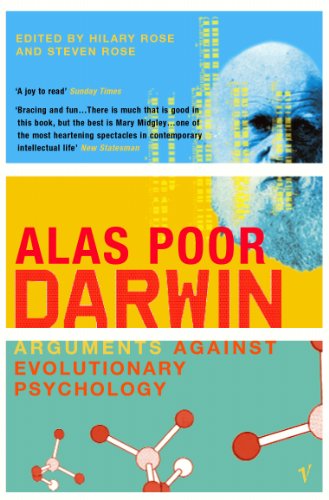 In Stock
£5.99
Today, genes are called upon to explain almost every aspect of our lives, from social inequalities to health, sexual preference and criminality.
Very Good Good Well Read
Only 2 left

Today, genes are called upon to explain almost every aspect of our lives, from social inequalities to health, sexual preference and criminality. Based on Darwin's theory of evolution and natural selection, Evolutionary Psychology with its claim that 'it's all in our genes' has become the most popular scientific theory of the late 20th century. Books such as Richard Dawkins's The Selfish Gene, Edward O.Wilson's Consilience and Steven Pinker's The Language Instinct have become bestsellers and frame the public debate on human life and development: we can see their influence as soon as we open a Sunday newspaper. In recent years, however, many biologists and social scientists have begun to contest this new biological determinism and shown that Evolutionary Psychology rests on shaky empirical evidence, flawed premises and unexamined political presuppositions. In this provocative and ground-breaking book, Hilary and Steven Rose have gathered together the most eminent and outspoken critics of this fashionable ideology, ranging from Stephen Jay Gould and Patrick Bateson to Mary Midgley, Tim Ingold and Annette Karmiloff-Smith. What emerges is a new perspective on human development which acknowledges the complexity of life by placing at its centre the living organism rather than the gene.

"At last! With humor and expertise, this diverse group of critical thinkers -- social and natural scientists and philosophers -- take on sociobiology, reincarnated as evolutionary psychology. In the current haze and maze of genes, it is a relief to read these earnest, funny, and always intelligent essays."
-- Ruth Hubbard, Harvard University professor emereta of biology and author of "Exploding the Gene Myth" and "The Politics of Women's Biology"
" 'Evolutionary psychology' is the latest episode in the misuse of biology. Hilary and Steven Rose have been leaders in the struggle against this kind of pseudo-science and in Alas Poor Darwin they bring together a superb collection of essays debunking this latest attempt to hijack Darwin. Anyone who has been seduced by the claims of 'evolutionary psychology' should read this book."
-- Richard Lewontin, Harvard University professor of zoology and biology, and author of "The Triple Helix"
"Darwin clearly loved his distinctive theory of natural selection -- the powerful ideas that he often identified in letters as his dear 'child.' But, like any good parent, he understood limits and imposed discipline. He knew that the complex and comprehensive phenomena of evolution could not be fully rendered by any single cause, even one so ubiquitous and powerful as his own brainchild."
-- From ""More Things in Heaven and Earth"" by Stephen Jay Gould, in Alas, Poor Darwin.

GOR001204704
Alas Poor Darwin: Arguments Against Evolutionary Psychology by Hilary Rose
Hilary Rose
Used - Very Good
Paperback
Vintage Publishing
2001-08-02
304
0099283190
9780099283195
N/A
Book picture is for illustrative purposes only, actual binding, cover or edition may vary.
This is a used book - there is no escaping the fact it has been read by someone else and it will show signs of wear and previous use. Overall we expect it to be in very good condition, but if you are not entirely satisfied please get in touch with us.