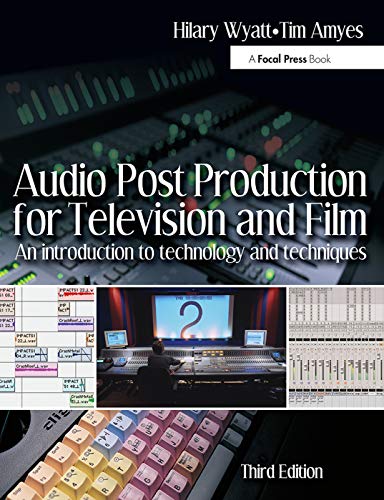 Audio Post Production for Television and Film
by Hilary Wyatt

Out of Stock
£2.99
Provides a step-by-step guide to the professional techniques used to shape a soundtrack through the production process. Covering sound for both film and television, this edition includes many of the practical techniques and shortcuts used by experienced editors and mixers. It explains the basics of audio post production how audio is recorded.
Very Good
Only 0 left

Audio Post Production for Television and Film: An introduction to technology and techniques by Hilary Wyatt

Previously titled Audio Post-production in Video and Film, this third edition has been completely revised and restructured to provide a step-by-step guide to the professional techniques used to shape a soundtrack through the production process. Covering sound for both film and television, this edition includes many of the practical techniques and shortcuts used by experienced editors and mixers.

Part one explains the basics of audio post production - how audio is recorded, how sound and picture stay in sync, how audio can be exported from system to system, and how film and video technology works. Part two follows the path of production sound from its original recording right through to the final mix, and includes sections on editing sound with picture, dialogue, sound effects and music editing, how to run ADR and Foley record sessions, and mixing, using many practical examples.

Audio Post Production for Television and Film is aimed at professionals already working in the industry, newcomers, students and those considering sound for film and television as a career - in fact anyone who wants an insight into current professional practices and a comprehensive overview of the sound post production process.

"A comprehensive guide to creating, editing and finalizing soundtracks for film and TV...Well illustrated with plenty of practical examples, this is recommended." - Sound & Lighting International

"Any reader engaged in this field will want to possess their own copy. It makes riveting reading with many excellent illustrations helping the understanding."
Image Technology

"It's a book which will have something for everyone - even the most experienced technician. But its real value lies in its comprehensive overview of the art of producing sound for vision - a must for the student."
Playback Journal

"What is really interesting about this book is the techniques and technical knowledge - it is packed with little nuggets of useful information that will really impact on your work and workflow if you take them on board."
Focus magazine

"...is a good introduction to the process of producing a soundtrack to accompany a TV or Film shoot, and gives step by step instructions as to how the various professional techniques are used on the set...I would say that this is a useful and interesting book for beginners and essential reading for any student before being let loose on a set..." - BKSTS, May 2006

Hilary Wyatt is a freelance Dialogue Supervisor and Sound Effects Editor. She began her career in 1987, creating sound effects and editing music for a number of long running British 'cult' animation series. Since then Hilary has worked as a Sound Effects Editor on a wide range of productions including commercials, documentary, drama and feature films. In 1999 she supervised the dialogues on the British gangster film 'Sexy Beast', and has since as worked as Dialogue Supervisor on a number of British and American features. Recent credits include 'Jojo In the Stars'(Animation) 'Dr Zhivago' (TV) 'Bright Young Things', 'Dear Frankie'and 'White Noise'. Tim Amyes has many years experience in post-production, covering the whole production chain. As well as being a former sound supervisor at Scottish Television, Tim has worked at two other companies in the British ITV network, both as a sound recordist and dubbing mixer. He has been involved in industry training from the start, serving as one of the original members of Skillset, which was set-up to provide training standards (NVQs) for the UK television and film industries. He has also served on both national industry and union training committees, and advised on the recent Scottish Screen/BFI publication An Introduction to Film Language. Currently Tim Amyes lectures in audio, produces specialist corporate videos, and writes, having sold documentary scripts to both the BBC and ITV. A keen film enthusiast, he is a past member of the Scottish Film Archive's advisory committee.

GOR004416169
Audio Post Production for Television and Film: An introduction to technology and techniques by Hilary Wyatt
Hilary Wyatt
Used - Very Good
Paperback
Taylor & Francis Ltd
2004-10-20
302
0240519477
9780240519470
N/A
Book picture is for illustrative purposes only, actual binding, cover or edition may vary.
This is a used book - there is no escaping the fact it has been read by someone else and it will show signs of wear and previous use. Overall we expect it to be in very good condition, but if you are not entirely satisfied please get in touch with us.