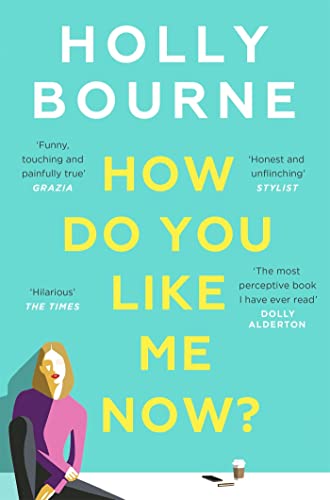 How Do You Like Me Now?
by Holly Bourne

How Do You Like Me Now?: the hilarious and searingly honest novel everyone is talking about by Holly Bourne

'Identifiable, heart-breaking and wickedly funny. I'd say this is one of my favourite books of the year' GIOVANNA FLETCHER

'Bourne holds a mirror up to contemporary aspiration' SUNDAY TIMES

Everyone wants to be Tori Bailey.

A straight-talking, bestselling author, she's inspired millions of women around the world with her self-help memoir and uplifting posts online. What's more, her perfect relationship with her long-term boyfriend is the envy of all their friends.

But Tori isn't being honest.

While everyone around her is getting engaged and having babies, Tori's boyfriend will barely look at her, let alone talk about marriage. And when her best friend Dee unexpectedly falls in love, suddenly Tori's in danger of being left behind.

Tori's built a career out of telling women how to live their best life, but is she brave enough to admit it's not what she wants?

The debut adult novel by bestselling author Holly Bourne is a blisteringly funny, honest and moving exploration of love, friendship and navigating the emotional rollercoaster of your thirties.

Everyone is raving about this book!

Brutally honest, appallingly funny and very moving - so accurate on the female interior, and the loneliness life in the public gaze. I want to read everything Holly Bourne has written now' ROSIE WALSH

'It'll resonate with anyone trying to convince themselves that sticking it out is better than being alone.' EMERALD STREET

'It speaks so many truths about being a woman in your thirties; friendships, love and what a fickle beast social media can be. ' CLEMMIE HOOPER

'Funny, real and heartbreaking. I haven't been this obsessed with a book in years.' LUCY VINE

'Injected with such reality it can't help but be hilarious' TIMES

Truly a f***ing good novel * Evening Standard *
It is so good! It is so honest about being a woman and all the things that are expected of us ... I enjoyed it very much. -- Marian Keyes
Bourne incinerates the lies we're all capable of telling ourselves in this raw and very funny book; it'll resonate with anyone trying to convince themselves that sticking it out is better than being alone. * Emerald Street *
The most perceptive book I have ever read about the female interior -- Dolly Alderton, The High Low Podcast
Injected with such reality it can't help but be hilarious * Times *
Relatable for any woman navigating emotional time bombs * Red *
There's a duality in reading things that are super relatable - it feels great to be heard, but also a little exposing. There's a little bit of that in Holly Bourne's latest novel, but nothing will stop you getting to the end...This novel is funny, touching and searingly honest * Grazia *
Funny, real and incredibly relatable * Culturefly *
It speaks so many truths about being a woman in your thirties; friendships, love and what a fickle beast social media can be. -- Clemmie Hooper
Honest and unflinching * Stylist *
Hilarious and painfully true * Grazia *
Identifiable, heart-breaking and wickedly funny. I'd say this is one of my favourite books of the year -- Giovanna Fletcher
I haven't been this obsessed with a book in years. It's painfully funny, real, but also heartbreaking. Get this book now or be the loser who can't join in when everyone else is talking about it. -- Lucy Vine, bestselling author of Hot Mess
'A smart, witty and perceptive novel; Bourne is razor-sharp on friendship, self-image and self-deception' -- Lucy Diamond, bestselling author of The House of New Beginnings
Sure to resonate with anyone navigating the emotional minefield of their thirties * Red Online *
Sublime, perfectly observed -- Laura Jane Williams, Ice Cream for Breakfast
'This novel is sharply observant about the issues in young women's lives today - feminism, relationships, mental health and motherhood - and it is very, very funny. * Bookseller *
Authentic, funny and utterly relatable; this book gave me all of the feelings. This generation's Bridget Jones! -- Carmel Harrington, author of The Woman at 72 Derry Lane
Perfectly addresses the storm of emotions you go through as a young woman, growing up in a world where you need to have the best boyfriend, best career and best group of friends (and it's all got to be displayed beautifully across your social media profiles.) * BBC News Online *
'This is a deeply feminist novel that questions whether the competitive nature of social media is breeding a lifestyle conformism among women that can only limit their freedom and their happiness. It is also, almost line by line, wincingly funny' * Metro *
Will strike a chord with anyone who worries about their relationship with social media, feels like they're being left behind by their friends or is wrangling with the pressures of being in, or out, of a partnership in their 30s. Buy it for your best mate whose boyfriend isn't good enough for her, your recently dumped sister or just for yourself if you're feeling a little 'what the hell?' about your fourth decade; you'll all take something from it * Stylist *
Tori is surely the Bridget Jones of our times * Stylist *
Brutally honest but charmingly funny * Stylist *
Well-written, genuinely funny and movingly honest. It could be a life-changing read for many. * Sheerluxe *
Holly Bourne nails the pressures that young women face and captures that feeling of teetering on the edge of 30 and still not knowing what you want from life. It's funny and sad in equal measures' * The Express, S Magazine *
A very funny novel that lives up to its hype * The Sunday Telegraph *
Mordantly funny, flinchingly well-observed... A smart, zeitgeisty, and caustically funny read, it has characters you root for. More than that, however, Bourne holds a mirror up to contemporary aspiration, deftly probing the dissonant dualism between the shinier selves projected online and people's offline reality. * Sunday Times *
Cheerfully plunders all that can be plundered from a young woman's quest for life in the 'fast line' -- Helen Lederer, Metro
Funny, astute, bitingly honest, it's a genuine triumph * Bookseller *
Brutally honest, appallingly funny and very moving - so accurate on the female interior, and the loneliness life in the public gaze. I want to read everything Holly Bourne has written now -- Rosie Walsh, author of The Man Who Didn't Call
Funny, sad, honest, insightful, up-to-the-minute. Bourne's pacy narrative kept me guessing (and hoping)to the last page. -- Roisin Meaney, author of The Reunion

Holly started her writing career as a news journalist, where she was nominated for Best Print Journalist of the Year. She then spent six years working as an editor, a relationship advisor, and general 'agony aunt' for a youth charity - helping young people with their relationships and mental health. Inspired by what she saw, she started writing teen fiction, including the best-selling, award-winning 'Spinster Club' series which helps educate teenagers about feminism. When she turned thirty, Holly wrote her first adult novel, examining the intensified pressures on women once they hit that landmark. Alongside her writing, Holly has a keen interest in women's rights and is an advocate for reducing the stigma of mental health problems. She's helped create online apps that teach young people about sexual consent and is an ambassador for Women's Aid.

GOR009872173
How Do You Like Me Now?: the hilarious and searingly honest novel everyone is talking about by Holly Bourne
Holly Bourne
Used - Very Good
Paperback
Hodder & Stoughton
2019-05-28
384
1473667763
9781473667761
N/A
Book picture is for illustrative purposes only, actual binding, cover or edition may vary.
This is a used book - there is no escaping the fact it has been read by someone else and it will show signs of wear and previous use. Overall we expect it to be in very good condition, but if you are not entirely satisfied please get in touch with us.