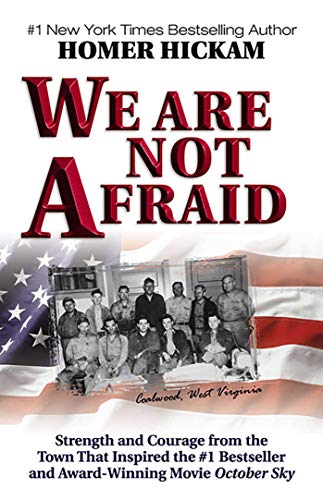 We Are Not Afraid
by Homer Hickam

We Are Not Afraid Summary

We Are Not Afraid: Strength and Courage from the Town That Inspired the #1 Bestseller and Award-Winning Movie by Homer Hickam

Today, fear affects even the strongest of us. Sometimes it's immediate, caused by a sense of imminent danger-the kind we felt after terrorists destroyed the magnificent World Trade Center, tore a giant wound in the Pentagon and killed thousands of people. But sometimes fear becomes a normal way of life.

In his best-selling memoir October Sky (aka Rocket Boys), Hickam introduced us to the rugged town of his youth, Coalwood, West Virginia, and the people who took on the hazardous and often brutal enterprise of coal mining. To survive and prosper, these people relied on an approach to living that would get them through hard times with an almost unnatural resilience. Over a lifetime, they learned to take on these attitudes:

These attitudes are summed up in the Coalwood Assumption: WE ARE NOT AFRAID.

Through poignant memories of his youth, best selling author Homer Hickam helps lead you beyond fear to find the courage and strength to live more happily and look toward to future with optimism.

Homer Hickam is the author of the #1 New York Times bestseller October Sky (aka Rocket Boys) which received a National Book Critics Circle nomination and was named a New York Times Notable Book of 1998. He is the author of the "Coalwood Trilogy" (October Sky, The Coalwood Way and Sky of Stone), Back to the Moon and Torpedo Junction. He is also a decorated Vietnam combat veteran, retired NASA engineer, an Olympic torch-bearer, and the holder of Alabama's highest award for heroism. He lives with his wife in Huntsville, Alabama. Click here to visit Homer Hickam's website.

GOR005585219
We Are Not Afraid: Strength and Courage from the Town That Inspired the #1 Bestseller and Award-Winning Movie by Homer Hickam
Homer Hickam
Used - Very Good
Paperback
Unknown
0
075730012X
9780757300127
N/A
Book picture is for illustrative purposes only, actual binding, cover or edition may vary.
This is a used book - there is no escaping the fact it has been read by someone else and it will show signs of wear and previous use. Overall we expect it to be in very good condition, but if you are not entirely satisfied please get in touch with us.