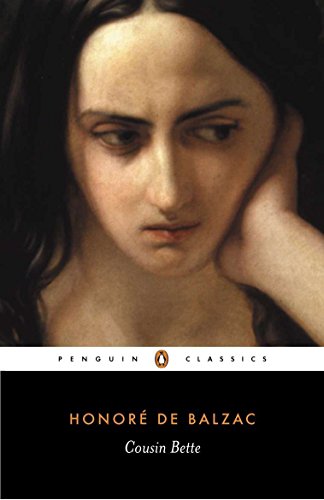 In Stock
£9.99
Poor, plain spinster Bette is compelled to survive on the condescending patronage of her socially superior relatives in Paris: her beautiful, saintly cousin Adeline, the philandering Baron Hulot and their daughter Hortense.
Very Good Good Well Read
Only 2 left

A gripping tale of violent jealousy, sexual passion and treachery, Honore de Balzac's Cousin Bette is translated from the French with an introduction by Marion Ayton Crawford in Penguin Classics.

Poor, plain spinster Bette is compelled to survive on the condescending patronage of her socially superior relatives in Paris: her beautiful, saintly cousin Adeline, the philandering Baron Hulot and their daughter Hortense. Already deeply resentful of their wealth, when Bette learns that the man she is in love with plans to marry Hortense, she becomes consumed by the desire to exact her revenge and dedicates herself to the destruction of the Hulot family, plotting their ruin with patient, silent malice. The culmination of the Comedie humaine, and a brilliant portrayal of the grasping, bourgeois society of 1840s Paris, Cousin Bette is one of Balzac's greatest triumphs as a novelist.

Honore De Balzac (1799-1850) failed at being a lawyer, publisher, printer, businessman, critic and politician before, at the age of thirty, turning his hand to writing. His life's work, La Comedie humaine, is a series of ninety novels and short stories which offer a magnificent panorama of nineteenth-century life after the French Revolution. Balzac was an influence on innumerable writers who followed him, including Marcel Proust, Emile Zola, Charles Dickens, and Edgar Allan Poe.

Honore de Balzac was born in Tours in 1799 to a bourgeouis family. His first success with writing came with the publication of Les Chouans in 1829 which was followed by a vast collection of novels and short stories of which Cousin Bette, first published in 1847, is one of the chief novels. He died in 1850 only a few months after his marriage to the Polish countess Evelina Hanska, with whom he had conducted a romantic correspondence for 18 years.

Marion Crawford translated two other titles for Penguin; Old Goriot and Eugenie Grandet before her death in 1973.

GOR001202888
Cousin Bette by Honore de Balzac
Honore de Balzac
Used - Very Good
Paperback
Penguin Books Ltd
1965-04-01
464
0140441603
9780140441604
N/A
Book picture is for illustrative purposes only, actual binding, cover or edition may vary.
This is a used book - there is no escaping the fact it has been read by someone else and it will show signs of wear and previous use. Overall we expect it to be in very good condition, but if you are not entirely satisfied please get in touch with us.