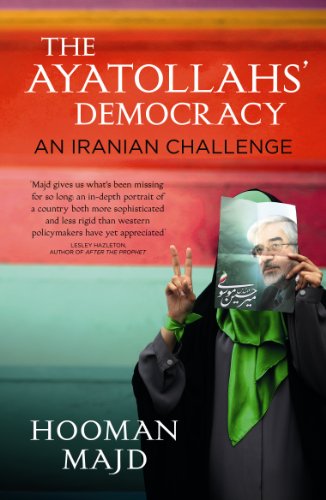 The Ayatollahs' Democracy
by Hooman Majd

In Stock
£3.59
Iran is a country with global ambitions, an elaborate political culture, and enormous implications for world peace. How can its diversity of political positions resolve itself? This title shows that, despite the violence of the 2009 elections, the ideal of an Iranian republic is still alive.
Very Good
Only 1 left

The Ayatollahs' Democracy: An Iranian Challenge by Hooman Majd

Iran is a country with global ambitions, an elaborate political culture, and enormous implications for world peace. How will its diversity of political positions resolve itself? Drawing on privileged access to Iranian society, Hooman Majd has spoken to ayatollahs, politicians and ordinary people to show that, despite the violence of the 2009 elections, the ideal of an Iranian republic is still alive. A personal, candid tour of the political landscape, The Ayatollahs' Democracy is a powerful dispatch from a country at a historic turning point.

In vividly readable style ... Majd gives us what's been missing for so long: a nuanced, in-depth portrait of a country both far more sophisticated and far less rigid than western policymakers have yet appreciated -- Lesley Hazleton, author of After the Prophet: the epic story of the Shia-Sunni split
No writer knows more about modern Iran than Hooman Majd. Nor does any other commentator write more cogently, or more beautifully -- Reza Aslan, author of No god but God and Beyond Fundamentalism

Hooman Majd was born in Tehran, Iran in 1957, and lived abroad from infancy with his family who were in the diplomatic service. He attended boarding school in England and college in the United States, and stayed in the U.S. after the Islamic Revolution of 1979. Majd had a long career in the entertainment business before devoting himself to writing and journalism full-time.

GOR004785360
The Ayatollahs' Democracy: An Iranian Challenge by Hooman Majd
Hooman Majd
Used - Very Good
Paperback
Penguin Books Ltd
2012-01-05
288
0141047518
9780141047515
N/A
Book picture is for illustrative purposes only, actual binding, cover or edition may vary.
This is a used book - there is no escaping the fact it has been read by someone else and it will show signs of wear and previous use. Overall we expect it to be in very good condition, but if you are not entirely satisfied please get in touch with us.