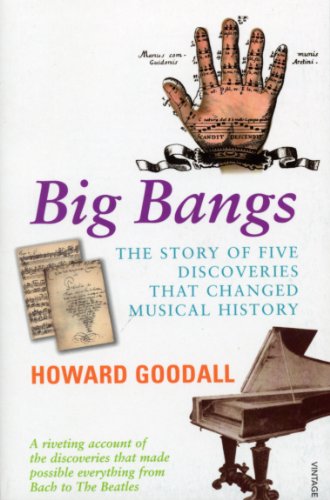 In Stock
£8.49
The dramatic story of five key turning points in a thousand years of Western music - discoveries that changed the course of history. His "big bangs" may not be the ones we expect - some are surprising and some are so obvious we overlook them - but all have had an extraordinary impact.
Like New Very Good Good
Only 3 left

The dramatic story of five key turning points in a thousand years of Western music - discoveries that changed the course of history. Who first invented 'Doh Re Mi...'? What do we mean by "in tune"? Looking back down the corridor of a thousand years, Howard Goodall guides us through the stories of five seismic developments in the history of Western music. His "big bangs" may not be the ones we expect - some are surprising and some are so obvious we overlook them - but all have had an extraordinary impact. Goodall starts with the invention of notation by an 11th-century Italian monk, which removed the creation of music from the hands of the players to the pens of the composers; moves on to the first opera; then to the invention of the piano, and ends with the story of the first recording made in history. Howard Goodall has the gift of making these complicated musical advances both clear and utterly fascinating. Racy and vivid in a narrative full of colourful characters and graphic illustrations of technical processes, he also gives a wonderful sense of the culture of trial and error and competition, be it in 11th-century Italy or 19th-century America, in which all progress takes place. Big Bangs opens a window on the crucial moments in our musical culture - discoveries that made possible everything from Bach to the Beatles - and tells us a riveting story of a millennium of endeavour.

"Goodall has a prodigious gift for gathering information. People who know nothing about music will learn a lot here" * Sunday Tribune *
"Intelligent, infectious" * Observer *
"Writing a breezy history of music is a tough nut to crack, but Goodall manages it" * Independent *

Howard Goodall is an Emmy, BRIT and BAFTA award-winning composer of choral music, stage musicals, film and TV scores - among them Red Dwarf, QI and Blackadder - as well as a distinguished broadcaster and the author of Big Bangs: The Story of Five Discoveries that Changed Musical History. In recent years he has been England's first ever National Ambassador for Singing, the Classical Brit Composer of the Year, and Classic FM's Composer-in-Residence. He was appointed Commander of the Order of the British Empire (CBE) in the 2011 New Year Honours for services to music education.

GOR001119378
Big Bangs by Howard Goodall
Howard Goodall
Used - Very Good
Paperback
Vintage Publishing
2001-02-08
256
0099283549
9780099283546
N/A
Book picture is for illustrative purposes only, actual binding, cover or edition may vary.
This is a used book - there is no escaping the fact it has been read by someone else and it will show signs of wear and previous use. Overall we expect it to be in very good condition, but if you are not entirely satisfied please get in touch with us.