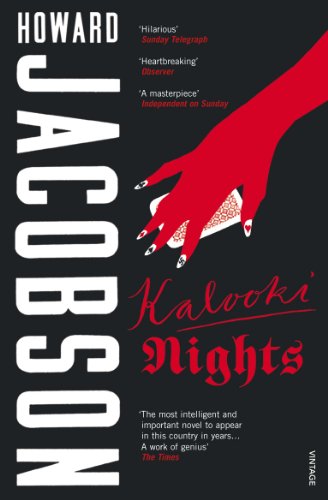 In Stock
£4.49
`This book is Jacobson's masterpiece' Jonathan Freedland'A work of genius' A.C. Grayling, The TimesWild, angry and uproarious, Kalooki Nights is a darkly comic, timely novel of what it means to be human. Max Glickman is son to an atheist boxer, Jack 'The Jew' Glickman, and a glamorous card-playing mother.
Very Good
8 in stock

`This book is Jacobson's masterpiece' Jonathan Freedland 'A work of genius' A.C. Grayling, The Times Wild, angry and uproarious, Kalooki Nights is a darkly comic, timely novel of what it means to be human. Max Glickman is son to an atheist boxer, Jack 'The Jew' Glickman, and a glamorous card-playing mother. Growing up in the peace and security of the 1950s Manchester suburbs, the word 'extermination' haunts his vocabulary and Nazis lurk in his imagination. When his childhood friend Manny is released from prison, the tug of religion and history proves too strong to be ignored and Max must accept there is no refuge from the dead... 'Raging, contentious, hilarious, holy, deicidal, heart-breaking' Sunday Telegraph

"In this age of lazy reviewing, facile judgment and inflated rhetoric, how is one to convey news of the arrival of a work of genius? This powerful, troubling, moving, profound novel is nothing less. Its architecture - more accurately: its engineering, the construction of it - is a feat of brilliance, so sustained and accurate is it, and yet this is the least of its merits. What really steals one's breath away is its sharpness and depth of insight - a sharpness that flays, and a depth almost too vertiginous to describe - and the remorseless tragedy it unfolds, even as it makes one laugh aloud, sometimes in shock. It is the most intelligent and important novel to appear in this country in years." -- AC Grayling * The Times *
"This is turbocharged; someone has put a rocket under Jacobson and the result is scintillating....Jacobson is quite simply a master of comic precision. He writes like a dream, with a complete mastery of technique...He can have you in stitches either with a long, beautifully timed paragraph or with a mere two words..." -- Nick Lezard * Evening Standard *
"The raging, contentious, hilarious, holy, deicidal, heartbreaking Kalooki Nights is a novel that stands toe-to-toe with the greats" -- Christopher Cleave * Sunday Telegraph *
"Kalooki Nights is a book to laugh at, learn from and argue with" -- David Horspool * The Times *
"Very funny...a rich, dense book...not so much like reading a novel as sharing a train carriage with its narrator...There is much to learn and a good deal to enjoy" * Spectator *

Howard Jacobson has written sixteen novels and five works of non-fiction. He won the Bollinger Everyman Wodehouse Award in 2000 for The Mighty Walzer and then again in 2013 for Zoo Time. In 2010 he won the Man Booker Prize for The Finkler Question; he was also shortlisted for the prize in 2014 for J.

GOR001007816
Kalooki Nights by Howard Jacobson
Howard Jacobson
Used - Very Good
Paperback
Vintage Publishing
2007-07-05
480
0099501368
9780099501367
N/A
Book picture is for illustrative purposes only, actual binding, cover or edition may vary.
This is a used book - there is no escaping the fact it has been read by someone else and it will show signs of wear and previous use. Overall we expect it to be in very good condition, but if you are not entirely satisfied please get in touch with us.