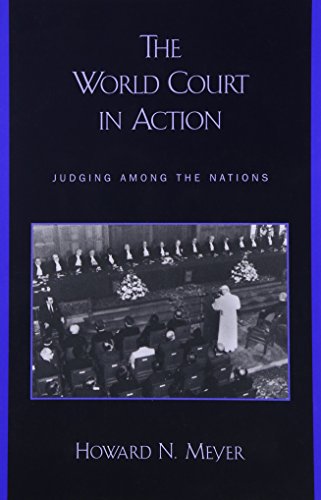 The World Court in Action
by Howard N. Meyer

In Stock
£3.99
In this book, Howard N. Meyer traces the World Court back to The Hague Conference of 1899 and shows its development through World War I, the League of Nations, World War II, and the Cold War, all the way up to the contemporary challenges of East Timor and Kosovo.
Very Good
Only 1 left

The World Court in Action Summary

The World Court in Action: Judging among the Nations by Howard N. Meyer

Over a century ago, a precursor to the International Court of Justice, usually called the World Court, was created. The United States had an important role in founding the Court, and a U.S. citizen-Andrew Carnegie-funded the Peace Palace, the building in which the World Court still convenes. But in 1985, during the second Reagan-Bush Administration, the U.S. effectively withdrew its support and authority from the Court in respose to its ruling on the U.S. use of force in Nicaragua. Since that time, the role of the World Court has grown in importance internationally even though the U.S. refuses to participate fully. And because the U.S. role has been so attenuated, the full story of the World Court has not been told, especially to U.S. citizens and students whose ignorance of it is a national embarrassment. Howard N. Meyer-longtime legal authority, activist, and champion of untold or misunderstood histories-traces the World Court all the way back to The Hague Conference of 1899 and shows its development through World War I, the League of Nations, World War II, and the Cold War, all the way up to the contemporary challenges of East Timor and Kosovo. More recently, Meyer distinguishes between the nation-state oriented work of the World Court and the work of the International Criminal Court which was proposed in 1998 to prosecute individual war criminals like Milosevic and others coming out of the conflicts in the former Yugoslavia and Rwanda. As different as they are, the World Court and the ICC have a common problem that this book seeks to address: resistance in Washington to the international rule of law, especially when it comes to authority surrounding the use of force.

The World Court in Action Reviews

Provide[s] a good overview of the history of the formation and ongoing work of the World Court, and addresses the underlying need for institutions like it and its more recent international criminal successors. I would recommend it for any law school library. -- Charlotte Bynum, Tulane University Law Library * International Journal Of Legal Information *
Howard Meyer obviously believes that the World Court and international law are institutions that demand our respect. Yet his accessible and well-written work belies no anger and remains a balanced, well-presented brief on behalf of a unique American-or New York-movement that set out to solve the world's problems and to a great degree succeeded in changing world history, despite recent setbacks. Mr. Meyer's is a voice of hope and optimism firmly grounded in reality. * New York Law Journal *
Howard N. Meyer should be far better know to the American public. He is a leading authority on the Rule of Law in international affairs, as his The World Court in Action: Judging Among the Nations attests. * Jewish Peace Fellowship Newsletter *
The World Court in Actionis essential-and enjoyable-reading for anyone concerned about the future of the International Court of Justice and a global rule-of-law system.
Meyer's book is a rare gem from a knowledgeable author willing to help readers understand the history of the World Court and the United States' contribution to it. He succeeds in this ambitious task and the result is both readable and engaging. * Santa Clara Law Review *
The end of the Cold War made it possible for the U.S. to lead the world in returning to wholehearted acceptance of the peace-serving principles of the Law of Nations. Our leadership in this is essential to enable the World Court to play its full part in establishing peace under Law, as its founders had contemplated and fondly hoped. To this end it is critical to eliminate public ignorance about the Court and its history. To meet that need this book can make an important contribution. -- Fr. Theodore M. Hesburgh, C.S.C., from the Foreword, president emeritus of Notre Dame University
The principal value of the book lies in its simple introduction to numerous cases that have come before the PCIJ and the ICJ. Thus, for the novice who does not know the difference between international and national law or between the PCIJ and the ICJ this book provides a valuable introduction. It also relates the work of the World Court to events that we all inevitably have read about in the national papers at some time or another. This is valuable for both nonlawyers and for most lawyers, especially American lawyers, for whom the World Court is a distant dream that has little to do with reality. * Peace & Change *
This book fills an important knowledge gap about the International Court of Justice (ICJ), especially now, as the debate about U.S. involvement with its 'sister' court - the International Criminal Court - rages on. The book is accessible without skimping on the essential historical and legal details that make the story of the International Court of Justice so fascinating. Meyer offers a model of advocacy for international institutions like the World Court which both teachers and students of social studies will find compelling. * Social Education *

Howard N. Meyer is a lawyer and a well-regarded social historian of major epochs and emblematic political actors within them. His book, The Amendment That Refused to Die, was nominated for a Pulitzer Prize. Among his many writings on the Vietnam War, one is credited with stimulating action on the part of U.S. university presidents against the Nixon policies in Indochina. He is author of numerous books and articles on human rights and peace law, and history. He has sought to revive the respect deserved by Ulysses S. Grant, Charles Sumner, Thaddeus Stevens, and others. Recently in The Magnificent Activist he has continued an effort to restore the life and work of Thomas Wentworth Higginson to our nation's memory.

GOR010207708
The World Court in Action: Judging among the Nations by Howard N. Meyer
Howard N. Meyer
Used - Very Good
Paperback
Rowman & Littlefield
2001-12-01
256
0742509249
9780742509245
N/A
Book picture is for illustrative purposes only, actual binding, cover or edition may vary.
This is a used book - there is no escaping the fact it has been read by someone else and it will show signs of wear and previous use. Overall we expect it to be in very good condition, but if you are not entirely satisfied please get in touch with us.