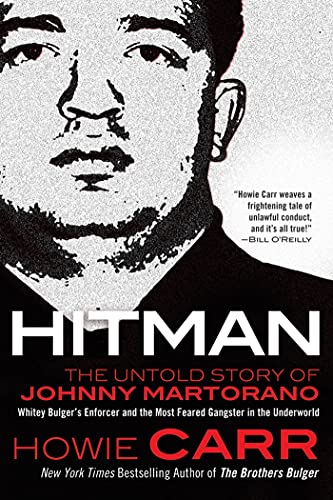 In Stock
£11.99
For two decades Johnny Martorano struck fear into anyone even remotely connected to his world. His partnership with Whitey Bulger and the infamous Winter Hill Gang led to twenty murders - for which Johnny would serve twelve years in prison. This title presents his life story.
Very Good Well Read
Only 4 left

Martin Scorsese's "The Departed" barely touched on his story. Now radio talk show sensation, crime reporter, and Boston Herald columnist, Howie Carr takes us into the heart of the life of Johnny Martorano. For two decades Martorano struck fear into anyone even remotely connected to his world. His partnership with Whitey Bulger and the infamous Winter Hill Gang led to twenty murders - for which Johnny would serve twelve years in prison. Carr also looks at the politicians and FBI agents who aided Johnny and Whitey, and at the flamboyant city of Boston which Martorano so ruthlessly ruled. A plethora of paradoxes, Johnny Martorano was Mr. Mom by day and man-about-town by night. Surrounded by fast-living politicians, sports celebrities, and show biz entertainers, Johnny was charismatically colourful - as charming as he was frightening. After all, he was, in the end ...a hitman. The paperback edition of Howie Carr's riveting true-crime story includes a new epilogue detailing Whitey Bulger's dramatic June 2011 capture.

"Howie Carr weaves a frightening tale of unlawful conduct, and it's all true!" --Bill O'Reilly on Hitman

"The indictments of mobster-mangled Boston continue to rain down in Howie Carr's superb new true-crime book, Hitman. It's horrifying, it's deadpan shocking, it's a brilliant treatise on criminal psychopathy, and a portrait of a city defined and subverted by hoodlums run amok. Read this book--it will grab you, garrotte you, and leave you gasping for breath." --James Ellroy, bestselling author of American Tabloid and L.A. Confidential

Howie Carr is a columnist for the Boston Herald. He wrote The Brothers Bulger, which spent eleven weeks on the New York Times bestseller list, and the New York Times bestseller Hitman. Carr hosts a daily four-hour radio talk show syndicated throughout New England. In 1985, Carr won a National Magazine Award, and in 2008 he was elected to the National Radio Hall of Fame. Carr lives in suburban Boston with his wife and their three daughters.

GOR004673526
Hitman by Howie Carr
Howie Carr
Used - Very Good
Paperback
St Martin's Press
2012-06-12
480
0765332396
9780765332394
N/A
Book picture is for illustrative purposes only, actual binding, cover or edition may vary.
This is a used book - there is no escaping the fact it has been read by someone else and it will show signs of wear and previous use. Overall we expect it to be in very good condition, but if you are not entirely satisfied please get in touch with us.