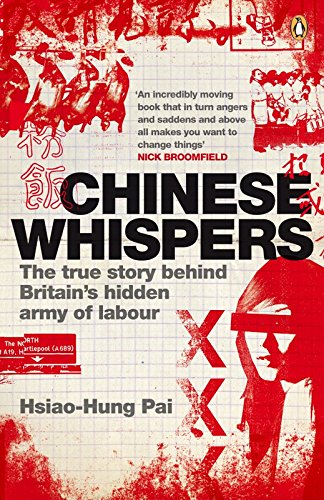 In Stock
£8.99
There are thousands of undocumented Chinese immigrants in Britain. They've travelled here because of desperate poverty, and must keep their heads down and work themselves to the bone. This book reveals a shadowy world where human beings are exploited in ways unimaginable in our civilized twenty-first century.
Very Good Well Read
Only 1 left

You know the people in this book.

You'll remember the harassed waitress from your local Chinese restaurant. You've noticed those builders across the street working funny hours and without helmets. You've eaten the lettuce they picked, or bought the microwave they assembled. The words `cockle-pickers', `Morecambe Bay', `Chinese illegals found dead in lorry' will ring a bell.

But did you know that there are hundreds of thousands of undocumented Chinese immigrants in Britain? They've travelled here because of desperate poverty, and must keep their heads down and work themselves to the bone.

Hsiao-Hung Pai, the only journalist who knows this community, went undercover to hear the stories of this hidden work force. She reveals a scary, shadowy world where human beings are exploited in ways unimaginable in our civilized twenty-first century.

CHINESE WHISPERS exposes the truth behind the lives of a hidden work force here in Britain. You owe it to yourself, and them, to read it.

Hsiao-Hung Pai was born in Taiwan and came to Britain in 1991. She first started writing for Chinese publications and later for the Guardian, specialising in stories about the Chinese community. She covered the Morecambe cockle picking tragedy for The Guardian and in order to understand the plight of other Chinese migrants, she went undercover, and is the only journalist working in Britain who has truly penetrated the world of undocumented Chinese migrants.

Hsiao-Hung now works as a freelance journalist, writing for the Guardian, the New Statesman, and others. Nick Broomfield's recent film GHOSTS was based on her work. CHINESE WHISPERS is her first book. Hsiao-Hung lives in London with her partner.

GOR001180836
Chinese Whispers: The True Story Behind Britain's Hidden Army of Labour by Hsiao-Hung Pai
Hsiao-Hung Pai
Used - Very Good
Paperback
Penguin Books Ltd
2008-04-23
288
0141035684
9780141035680
Short-listed for Orwell Prize 2009
Book picture is for illustrative purposes only, actual binding, cover or edition may vary.
This is a used book - there is no escaping the fact it has been read by someone else and it will show signs of wear and previous use. Overall we expect it to be in very good condition, but if you are not entirely satisfied please get in touch with us.