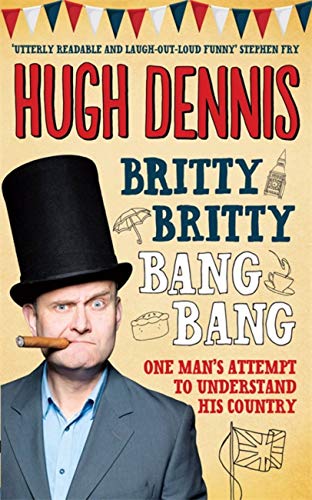 In Stock
£3.99
Mock the Week and Outnumbered's Hugh Dennis with an hilarious and insightful exploration of the changing image of Britain and Britishness.
Very Good
6 in stock

Hugh Dennis' hilarious and insightful exploration of the changing image of Britain and Britishness will enthral those who love Outnumbered, The Now Show, Mock the Week and quintessentially British humour.

Hugh Dennis has secretly been worrying about what being "British" meant for nearly a decade, ever since his friend Ardal O'Hanlon had told him in passing that he was the most British person he had ever met. Hugh was unclear whether he was being praised, teased, vaguely insulted or possibly all three - because it has always been very difficult to know how to feel about being British.

In 2012 we surprised the world. Not only did we provide an Olympic Games much better than Mitt Romney expected, or the French hoped, we also presented a completely new face - a gleaming fresh vision of Britain.

Who thought that the country we knew so well would suddenly nip up into the national loft and bring down so much we had all forgotten about?

What are our great traditions?
Are we really good at inventing stuff?
Are we obsessed by the weather?
Did we invent Democracy?
Who was Kenneth Branagh meant to be in that opening ceremony?

Frankly this country has got some explaining to do...

What readers are saying about Britty Britty Bang Bang:

'Pure Hugh Dennis! Witty Britty! A witty anecdote in every other sentence'

What do they of England know, that only England know? Kipling asked. Writing about your own country is the hardest thing to do. Hugh Dennis has inspected our sceptred isle and remorselessly scoured it inside out and come up with a funny, hilariously satirical, but warm and brilliantly observed portrait of our complicated, ridiculous but loveable country. Utterly readable and laugh out loud funny. * Stephen Fry *
Funny and interesting. The best guide to Britain since the 1976 AA Road Atlas. * John O'Farrell *
I wish people had written funny books like this about boring things when I was a kid. I might be a history professor by now. Hugh Dennis has written a funny and entertaining book... it passed through my eyes and into my brain so easily and for once the information didn't come right out of my ears within seconds. Lots of laughs and much more than quite interesting. * Jo Brand *
An archetypal British book: very funny, genuinely informative, and, most importantly, makes you forget what you're actually doing on the toilet. * David Baddiel *

Hugh Dennis is an award-winning writer, actor and comedian best known for weekly satirical panel show Mock The Week, Radio 4's The Now Show and BBC sit-com Outnumbered. He lives in Sussex with his real wife and his real children. To their annoyance he is interested in almost everything. He reads, runs, cycles, and is a Fellow of the Royal Geographical Society.

GOR004708670
Britty Britty Bang Bang: One Man's Attempt to Understand His Country by Hugh Dennis
Hugh Dennis
Used - Very Good
Paperback
Headline Publishing Group
2013-05-23
304
0755364295
9780755364299
N/A
Book picture is for illustrative purposes only, actual binding, cover or edition may vary.
This is a used book - there is no escaping the fact it has been read by someone else and it will show signs of wear and previous use. Overall we expect it to be in very good condition, but if you are not entirely satisfied please get in touch with us.