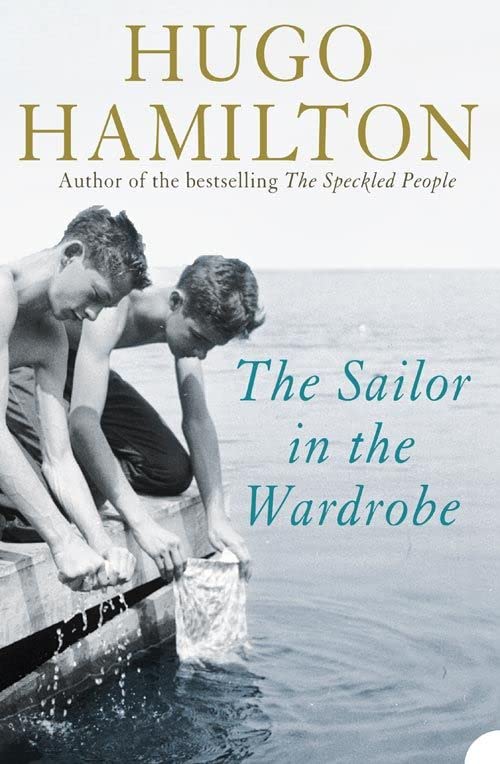 The Sailor in the Wardrobe
by Hugo Hamilton

Following on from the success of `The Speckled People', Hugo Hamilton's new memoir recounts the summer he spent working at a local harbour in Ireland, at a time of tremendous fear and mistrust.

The Sailor in the Wardrobe Summary

The Sailor in the Wardrobe by Hugo Hamilton

Following on from the success of `The Speckled People', Hugo Hamilton's new memoir recounts the summer he spent working at a local harbour in Ireland, at a time of tremendous fear and mistrust.

Young Hugo longs to be released from the confused identity he has inherited from his German mother and Irish father, but the backdrop of his mother's shame at the hands of Allied soldiers in the aftermath of the Second World War, along with his German cousin's mysterious disappearance somewhere on the Irish West Coast and the spiralling troubles in the north, seems determined to trap him in history. In an attempt to break free of his past, Hugo rebels against his father's strict and crusading regime and turns to the exciting new world of rock and roll, still a taboo subject in the family home.

His job at the local harbour, rather than offering a welcome respite from his speckled world, entangles him in a bitter feud between two fishermen - one Catholic, one Protestant. Hugo listens to the missing persons bulletins going out on the radio for his German cousin, and watches the unfolding harbour duel end in drowning before he can finally escape the ropes of history.

The Sailor in the Wardrobe Reviews

'Hamilton patterns the institutions and structures of family life, with his father's rules, curfews, punishments and terrifying rages, against the larger tyrannies of history. Simultaneously, he handles the conflicts, threats and aggressions of life outside home, much of which has to be kept secret, words of piercing clarity and immediacy convey his sense of guilt, in a world where terrible events continually hang above his head like the clouds drifting in from the sea. Hamilton's Irish-German-English voice remains unique. The question is where he will project it next.' Roy Foster, The Times

'It must establish Hugo as a major writer of the very first order.' Sunday Tribune

'Hamilton can interpret his very personal and unique family memories in a way that strikes a universal chord.' Irish Independent

'A lyrical, moving account of growing up in a family where the only approved languages were Irish and German. An exquisitely written and often moving book.' Image

Hugo Hamilton was born and grew up in Dublin. He is the author of five highly acclaimed novels: 'Surrogate City', 'The Last Shot' and 'The Love Test' (Faber); 'Headbanger' and 'Sad Bastard' (Secker); one collection of short stories; and the internationally acclaimed memoir, 'The Speckled People'. In 1992 he was awarded the Rooney Prize for Irish Literature.

GOR001043643
The Sailor in the Wardrobe by Hugo Hamilton
Hugo Hamilton
Used - Very Good
Paperback
HarperCollins Publishers
2006-10-02
288
0007232403
9780007232406
N/A
Book picture is for illustrative purposes only, actual binding, cover or edition may vary.
This is a used book - there is no escaping the fact it has been read by someone else and it will show signs of wear and previous use. Overall we expect it to be in very good condition, but if you are not entirely satisfied please get in touch with us.