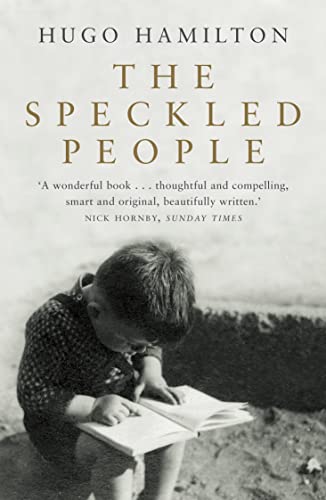 The Speckled People
by Hugo Hamilton

`This is the most gripping book I've read in ages ... It is beautifully written, fascinating, disturbing and often very funny.' Roddy Doyle

The Speckled People by Hugo Hamilton

`This is the most gripping book I've read in ages ... It is beautifully written, fascinating, disturbing and often very funny.' Roddy Doyle

The childhood world of Hugo Hamilton, born and brought up in Dublin, is a confused place. His father, a sometimes brutal Irish nationalist, demands his children speak Gaelic, while his mother, a softly spoken German emigrant who has been marked by the Nazi past, speaks to them in German. He himself wants to speak English. English is, after all, what the other children in Dublin speak. English is what they use when they hunt him down in the streets and dub him Eichmann, as they bring him to trial and sentence him to death at a mock seaside court.

Out of this fear and guilt and often comical cultural entanglements, he tries to understand the differences between Irish history and German history and turn the twisted logic of what he is told into truth. It is a journey that ends in liberation, but not before he uncovers the long-buried secrets that lie at the bottom of his parents wardrobe.

In one of the finest books to have emerged from Ireland in many years, the acclaimed novelist Hugo Hamilton has finally written his own story - a deeply moving memoir about a whole family's homesickness for a country they can call their own.

'A wonderful book ... thoughtful and compelling, smart and original, beautifully written ... Hamilton has done an awful lot more with his strange and oddly beautiful childhood than just write it down.'
Nick Hornby, Sunday Times

'This story about a battle over language and defeat 'in the language wars' is also a victory for eloquent writing, crafty and cunning in its apparent simplicity.'
Hermione Lee, Guardian

'Early as it is to risk a judgment, it is hard to believe that this year will produce many books as memorable or moving as this.'
Roy Foster, The Times

Hugo Hamilton was born and grew up in Dublin. He is the author of five highly acclaimed novels: 'Surrogate City', 'The Last Shot' and 'The Love Test' (Faber); 'Headbanger' and 'Sad Bastard' (Secker); and one collection of short stories. He has worked as a writer-in-residence at many leading universities, including most recently at Trinity College, Dublin. He has just returned to Ireland from a DAAD scholarship in Berlin.

GOR000411316
The Speckled People by Hugo Hamilton
Hugo Hamilton
Used - Very Good
Paperback
HarperCollins Publishers
2003-10-06
304
0007148119
9780007148110
Short-listed for YoungMinds Book Award 2003
Book picture is for illustrative purposes only, actual binding, cover or edition may vary.
This is a used book - there is no escaping the fact it has been read by someone else and it will show signs of wear and previous use. Overall we expect it to be in very good condition, but if you are not entirely satisfied please get in touch with us.