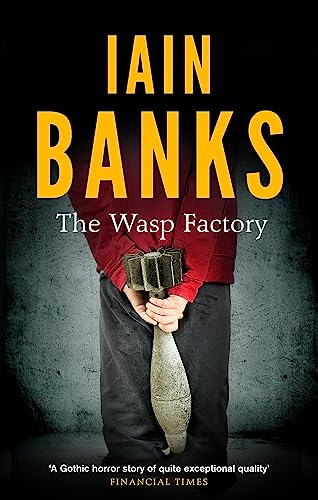 The Wasp Factory
by Iain Banks

Used Price
£5.49
New RRP £9.99
Free Shipping in the UK
Iain Banks' debut novel, The Wasp Factory, caused a storm of controversy when it was first published in 1984 and became an immediate classic.
Like New Very Good Good Well Read

The Wasp Factory by Iain Banks

'One of the top 100 novels of the century' Independent

'Macabre, bizarre, and impossible to put down' Financial Times

'Read it if you dare' Daily Express

The Wasp Factory is a bizarre, imaginative, disturbing, and darkly comic look into the mind of a child psychopath - one of the most infamous of contemporary Scottish novels.

'Two years after I killed Blyth I murdered my young brother Paul, for quite different reasons than I'd disposed of Blyth, and then a year after that I did for my young cousin Esmerelda, more or less on a whim. That's my score to date. Three. I haven't killed anybody for years, and don't intend to ever again. It was just a stage I was going through.'

Enter - if you can bear it - the extraordinary private world of Frank, just sixteen, and unconventional, to say the least.

One of the most brilliant first novels I have come across * Telegraph *
One of the top 100 novels of the century * Independent *
Read it if you dare * Express *
A brilliant book, barmy and barnacled with the grotesque * New Statesman *
Macabre, bizarre and impossible to put down * Financial Times *
Brilliant . . . irresistible . . . compelling * New York Times *

Iain Banks came to widespread and controversial public notice with the publication of his first novel, THE WASP FACTORY, in 1984. He gained enormous popular and critical acclaim for both his mainstream and his science fiction novels. Iain Banks died in June 2013.

GOR008372927
The Wasp Factory by Iain Banks
Iain Banks
Used - Like New
Paperback
Little, Brown Book Group
2013-06-10
256
0349139180
9780349139180
N/A
Book picture is for illustrative purposes only, actual binding, cover or edition may vary.
The book has been read, but looks new. The book cover has no visible wear, and the dust jacket is included if applicable. No missing or damaged pages, no tears, possible very minimal creasing, no underlining or highlighting of text, and no writing in the margins.