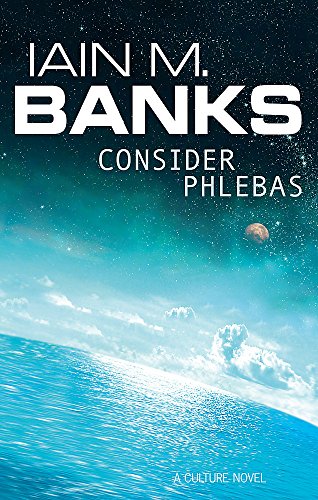 Consider Phlebas is a space opera of stunning power and awesome imagination, from a modern master of science fiction - soon to be a major TV series.

**Soon to be adapted as a major TV series**

The war raged across the galaxy. Billions had died, billions more were doomed. Moons, planets, the very stars themselves, faced destruction, cold-blooded, brutal, and worse, random. The Idirans fought for their Faith; the Culture for its moral right to exist. Principles were at stake. There could be no surrender.

Within the cosmic conflict, an individual crusade. Deep within a fabled labyrinth on a barren world, a Planet of the Dead proscribed to mortals, lay a fugitive Mind. Both the Culture and the Idirans sought it. It was the fate of Horza, the Changer, and his motley crew of unpredictable mercenaries, human and machine, to actually find it - and with it their own destruction.

Consider Phlebas is a space opera of stunning power and awesome imagination, from a modern master of science fiction.

Praise for the Culture series:

'Epic in scope, ambitious in its ideas and absorbing in its execution' Independent on Sunday

The Culture series:
Consider Phlebas
The Player of Games
Use of Weapons
The State of the Art
Excession
Inversions
Look to Windward
Matter
Surface Detail
The Hydrogen Sonata

Other books by Iain M. Banks:
Against a Dark Background
Feersum Endjinn
The Algebraist

Banks is a phenomenon: the wildly successful, fearlessly creative author of brilliant and disturbing non-genre novels, he's equally at home writing pure science fiction of a perculiarly gnarly energy and elegance * William Gibson *
There is now no British SF writer to whose work I look forward with greater keenness * THE TIMES *
Poetic, humourous, baffling, terrifying, sexy - the books of Iain M. Banks are all these things and more * NME *
Iain Banks came to widespread and controversial public notice with the publication of his first novel, THE WASP FACTORY, in 1984. He has since gained enormous popular and critical acclaim for both his mainstream and his science fiction novels.
GOR001165804
9781857231380
1857231384
Consider Phlebas: A Culture Novel by Iain M. Banks
Iain M. Banks
Culture
Used - Very Good
Paperback
Little, Brown Book Group
1988-04-14
480
N/A
Book picture is for illustrative purposes only, actual binding, cover or edition may vary.
This is a used book - there is no escaping the fact it has been read by someone else and it will show signs of wear and previous use. Overall we expect it to be in very good condition, but if you are not entirely satisfied please get in touch with us
Trustpilot