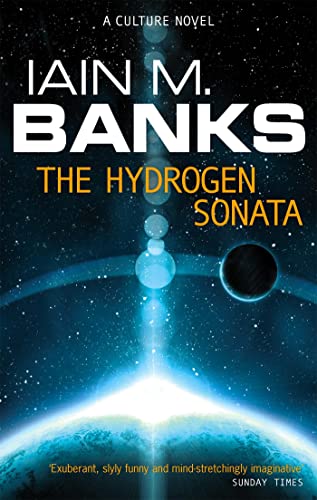 The Hydrogen Sonata: A Culture Novel by Iain M. Banks

The tenth Culture book from the awesome imagination of Iain M. Banks, a modern master of science fiction.

The Scavenger species are circling. It is, truly, the End Days for the Gzilt civilisation.

An ancient people, organised on military principles and yet almost perversely peaceful, the Gzilt helped set up the Culture ten thousand years earlier and were very nearly one of its founding societies, deciding not to join only at the last moment. Now they've made the collective decision to follow the well-trodden path of millions of other civilisations: they are going to Sublime, elevating themselves to a new and almost infinitely more rich and complex existence.

Amid preparations though, the Regimental High Command is destroyed. Lieutenant Commander (reserve) Vyr Cossont appears to have been involved, and she is now wanted - dead, not alive. Aided only by an ancient, reconditioned android and a suspicious Culture avatar, Cossont must complete her last mission given to her by the High Command. She must find the oldest person in the Culture, a man over nine thousand years old, who might have some idea what really happened all that time ago.

It seems that the final days of the Gzilt civilisation are likely to prove its most perilous.

Praise for the Culture series:

'Epic in scope, ambitious in its ideas and absorbing in its execution' Independent on Sunday

The Culture series:
Consider Phlebas
The Player of Games
Use of Weapons
The State of the Art
Excession
Inversions
Look to Windward
Matter
Surface Detail
The Hydrogen Sonata

Other books by Iain M. Banks:
Against a Dark Background
Feersum Endjinn
The Algebraist

25 years after Banks's first Culture novel he is as exuberant, slyly funny and mind-stretchingly imaginative as ever * SUNDAY TIMES *
Epic in scope, ambitious in its ideas and absorbing in its execution * INDEPENDENT ON SUNDAY *
One of the most enduring and endearing visions of the future * GUARDIAN *
Sharply satirical and packed with brilliant action scenes, this space opera proves British SF's big beard still plays the best tunes * BBC FOCUS *

Iain Banks came to widespread and controversial public notice with the publication of his first novel, The Wasp Factory, in 1984. Consider Phlebas, his first science fiction novel, was published under the name Iain M. Banks in 1987. He is now acclaimed as one of the most powerful,
innovative and exciting writers of his generation.

GOR005196197
The Hydrogen Sonata: A Culture Novel by Iain M. Banks
Iain M. Banks
Culture
Used - Very Good
Paperback
Little, Brown Book Group
2013-09-10
640
0356501493
9780356501499
Short-listed for The John W Campbell Memorial Award 2013 (UK)
Book picture is for illustrative purposes only, actual binding, cover or edition may vary.
This is a used book - there is no escaping the fact it has been read by someone else and it will show signs of wear and previous use. Overall we expect it to be in very good condition, but if you are not entirely satisfied please get in touch with us.