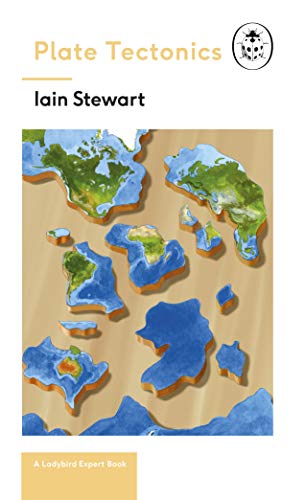 Plate Tectonics: A Ladybird Expert Book: Discover how our planet works from the inside out by Iain Stewart

How do plate tectonics work? Learn from the experts in the ALL-NEW LADYBIRD EXPERT SERIES

Discover in this accessible and authoritative introduction the fundamental theory of how our dynamic planet works.

You'll learn about the make up of the Earth in the past and the present, from monsoon-like currents in our planet's radioactive interior to magnetic force lines and what the planet would look like without water.

You will learn about:
- Our planet as an active living system
- The planetary force field
- Fault lines that cross continents
- How plates tectonics protects life on Earth
- And much more . . .

Written by the celebrated geologist, academic and popular science presenter Iain Stewart, Plate Tectonics explores the Earth as a planetary machine and investigates the people and ideas that changed the way we look at the world.

Learn about other topics in the Ladybird Experts series including Gravity, Quantum Physics, Climate Change and Evolution.

Written by the leading lights and most outstanding communicators in their fields, the Ladybird Expert books provide clear, accessible and authoritative introductions to subjects drawn from science, history and culture.

Iain is a geology professor at the University of Plymouth and Director of its Sustainable Earth Institute. He studies earthquakes, volcanism, and tsunamis, and is interested in communicating Earth science to anyone who will listen. As part of that 'public geoscience' he presents documentaries about the planet for BBC television, including Earth: The Power of the Planet; Earth: The Climate Wars, How Earth Made Us, How To Grow A Planet, The Rise of the Continents and Planet Oil.

GOR009044226
Plate Tectonics: A Ladybird Expert Book: Discover how our planet works from the inside out by Iain Stewart
Iain Stewart
The Ladybird Expert Series
Used - Very Good
Hardback
Penguin Books Ltd
2018-03-22
56
0718187180
9780718187187
N/A
Book picture is for illustrative purposes only, actual binding, cover or edition may vary.
This is a used book - there is no escaping the fact it has been read by someone else and it will show signs of wear and previous use. Overall we expect it to be in very good condition, but if you are not entirely satisfied please get in touch with us.