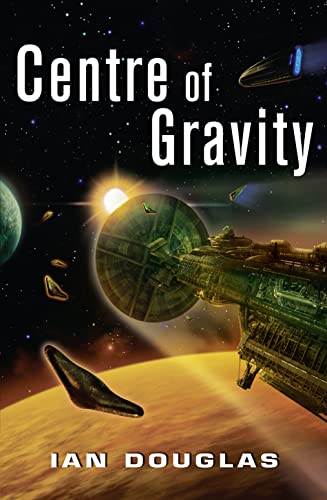 Centre of Gravity
by Ian Douglas

In the evolution of every sentient race, there is a turning point when the species achieves transcendence through technology.

The warlike Sh'daar are determined that this monumental milestone will never be achieved by the creatures known as human.

On the far side of known human space, the Marines are under siege, battling the relentless servant races of the Sh'daar aggressor. With a task force stripped to the bone and the Terran Confederation of States racked by dissent, rogue Admiral Alexander Koenig must make the momentous decision that will seal his fate and the fate of humankind.

A strong defensive posture is futile, so Koenig will seize the initiative and turn the gargantuan Star Carrier America toward the unknown. For the element of surprise is the only hope of stalling the Sh'daar assault on Earth's solar system-and the war for humankind's survival must be taken directly to the enemy.

`The action is full-blooded and almost non stop, yet the well-developed background is surprisingly rich and logical ... As immersive as it is impressive'
Kirkus (Starred Review)

Ian Douglas is the author of the popular military SF series The Heritage Trilogy, The Legacy Trilogy, and The Inheritance Trilogy. A former naval corpsman, he lives in Pennsylvania.

GOR004822973
Centre of Gravity (Star Carrier, Book 2) by Ian Douglas
Ian Douglas
Star Carrier
Used - Very Good
Paperback
HarperCollins Publishers
2012-10-04
400
0007482965
9780007482962
N/A
Book picture is for illustrative purposes only, actual binding, cover or edition may vary.
This is a used book - there is no escaping the fact it has been read by someone else and it will show signs of wear and previous use. Overall we expect it to be in very good condition, but if you are not entirely satisfied please get in touch with us.