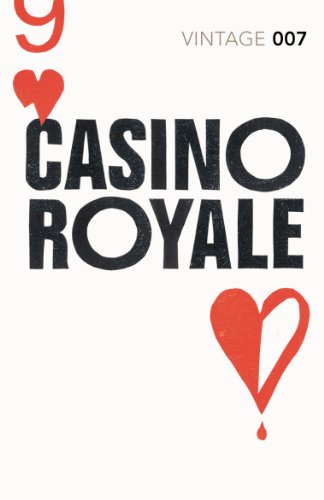 'Surround yourself with human beings, my dear James. They are easier to fight for than principles'

In Casino Royale, the first of Fleming's 007 adventures, a game of cards is James Bond's only chance to bring down the desperate SMERSH agent Le Chiffre. But Bond soon discovers that there is far more at stake than money.

'Surround yourself with human beings, my dear James. They are easier to fight for than principles.' In "Casino Royale", the first of Fleming's 007 adventures, a game of cards is James Bond's only chance to bring down the desperate SMERSH agent Le Chiffre. But Bond soon discovers that there is far more at stake than money.

Ian Fleming has discovered the secret of narrative art...the reader has to go on reading -- John Betjeman
A superb gambling scene, a torture scene which still haunts me, a beautiful girl -- Raymond Chandler
Mr Fleming's first novel is an extremely engaging affair...the especial charm of the book is the high poetry with which he invests the green blaize lagoons of the casino tables...Mr Fleming has produced a book that is both exciting and extremely civilized * Times Literary Supplement *
[Casino Royale is] lively, most ingenious in detail, on the surface as tough as they are made and charmingly well-bred beneath * Spectator *
One of the most original spy thrillers that has ever tickled a jaded palate * Empire News *

Ian Lancaster Fleming was born in London on 28 May 1908 and was educated at Eton College before spending a formative period studying languages in Europe. His first job was with Reuters news agency, followed by a brief spell as a stockbroker. On the outbreak of the Second World War he was appointed assistant to the Director of Naval Intelligence, Admiral Godfrey, where he played a key part in British and Allied espionage operations.

After the war he joined Kemsley Newspapers as Foreign Manager of the Sunday Times, running a network of correspondents who were intimately involved in the Cold War. His first novel, Casino Royale, was published in 1953 and introduced James Bond, Special Agent 007, to the world. The first print run sold out within a month. Following this initial success, he published a Bond title every year until his death. His own travels, interests and wartime experience gave authority to everything he wrote. Raymond Chandler hailed him as 'the most forceful and driving writer of thrillers in England.' The fifth title, From Russia with Love, was particularly well received and sales soared when President Kennedy named it as one of his favourite books. The Bond novels have sold more than sixty million copies and inspired a hugely successful film franchise which began in 1962 with the release of Dr No starring Sean Connery as 007.

The Bond books were written in Jamaica, a country Fleming fell in love with during the war and where he built a house, 'Goldeneye'. He married Anne Rothermere in 1952. His story about a magical car, written in 1961 for their only child Caspar, went on to become the well-loved novel and film, Chitty Chitty Bang Bang.

GOR007774218
Casino Royale by Ian Fleming
Ian Fleming
James Bond 007
Used - Like New
Paperback
Vintage Publishing
2012-09-03
256
0099576856
9780099576853
N/A
Book picture is for illustrative purposes only, actual binding, cover or edition may vary.
This is a used book - there is no escaping the fact it has been read by someone else and it will show signs of wear and previous use. Overall we expect it to be in very good condition, but if you are not entirely satisfied please get in touch with us.