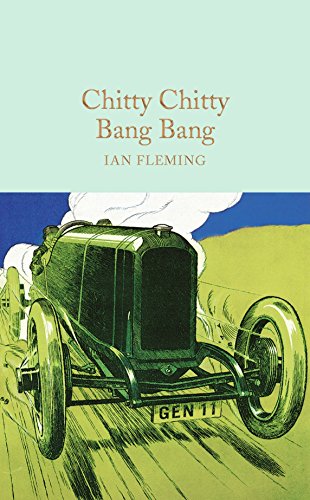 New Price
£9.99
Free Shipping in the UK
The enduring story of a magical car, with stunning illustrations by Joe Berger.
Reviews:
Trustpilot
New£9.99

With the proceeds from his latest invention, Crackpot Whistling Sweets, Commander Caractacus Pott buys his family their first car. It looks like a wreck, but once restored it turns out to be no ordinary vehicle; Chitty-Chitty-Bang-Bang is a magical car which can fly, swim and even think. Chitty and the eccentric, plucky Pott family set off on a succession of increasingly perilous adventures that take them across the English Channel and all the way to Paris.

First published in 1964, Chitty Chitty Bang Bang was Ian Fleming's only children's book, written for his son Caspar. Fleming was inspired by a celebrated English racing car nicknamed 'Chitty-Bang-Bang', which was built and raced by Count Louis Zborowski in the 1920s.

Ian Fleming - famous across the globe for creating James Bond - loved cars. And the faster the car, the better. It was this love that inspired him to write his only children's book, Chitty Chitty Bang Bang: The Magical Car - about a car that could fly. Fast.

He wrote it for his little boy, Caspar, when Fleming was recovering from a heart attack and his wife had hidden his typewriter to force him to rest. He wrote it secretly and in longhand, eventually sending it to his bemused editor, who had been expecting a new Bond novel. Chitty Chitty Bang Bang, published just after Fleming's death, became an immediate bestseller. It has been reinvented as a musical and as a film (with a screenplay by Roald Dahl). It is a jewel in the crown of children's fiction in the UK and across the world.

Several sequels have since been published, written by author Frank Cottrell Boyce.