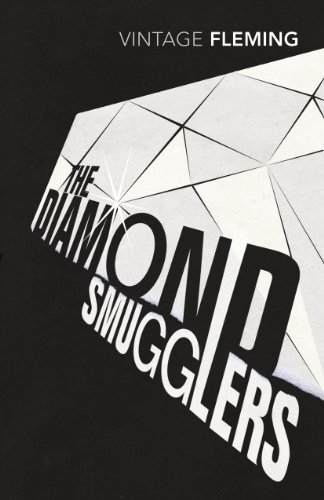 The Diamond Smugglers
by Ian Fleming

New Price
£10.19
Free Shipping in the UK
Tells the story of an operation responsible for smuggling millions of pounds worth of precious gems out of Africa. In this title, the author drew on interviews with the reluctant hero of the diamond companies' counter-attack to explore the world of the real master criminals of his time.
Reviews:
Trustpilot
New£10.19

The Diamond Smugglers by Ian Fleming

'One day in April 1957 I had just answered a letter from an expert in unarmed combat writing from a cover address in Mexico City, and I was thanking a fan in Chile, when my telephone rang...'

The Diamond Smugglers is the true story of an operation responsible for smuggling millions of pounds worth of precious gems out of Africa. Ian Fleming, creator of James Bond, drew on interviews with the reluctant hero of the diamond companies' counter-attack to explore the world of the real master criminals of his time.The result rivals Fleming's greatest spy novels.

It is often difficult to remember that we are not listening to his old hero Mr. James Bond...several yarns are worthy of the best spy-stories * Observer *
An exciting and richly fascinating account * Sunday Times *
Fleming not only had a gift for gripping plots, but an abundantly moreish prose style with pin-sharp descriptions. Betjeman was right. Fleming conjured an entire world, infinitely more colourful than our own, and one that may well go on for ever * Daily Telegraph *
Fleming's books are well-written, pacy and hard-edged -- Lee Child * Daily Mail *

Ian Lancaster Fleming was born in London on 28 May 1908 and was educated at Eton College before spending a formative period studying languages in Europe. His first job was with Reuters news agency, followed by a brief spell as a stockbroker. On the outbreak of the Second World War he was appointed assistant to the Director of Naval Intelligence, Admiral Godfrey, where he played a key part in British and Allied espionage operations.
After the war he joined Kemsley Newspapers as Foreign Manager of the Sunday Times, running a network of correspondents who were intimately involved in the Cold War. His first novel, Casino Royale, was published in 1953 and introduced James Bond, Special Agent 007, to the world. The first print run sold out within a month. Following this initial success, he published a Bond title every year until his death. His own travels, interests and wartime experience gave authority to everything he wrote. Raymond Chandler hailed him as 'the most forceful and driving writer of thrillers in England.' The fifth title, From Russia with Love, was particularly well received and sales soared when President Kennedy named it as one of his favourite books. The Bond novels have sold more than sixty million copies and inspired a hugely successful film franchise which began in 1962 with the release of Dr No starring Sean Connery as 007.
The Bond books were written in Jamaica, a country Fleming fell in love with during the war and where he built a house, 'Goldeneye'. He married Anne Rothermere in 1952. His story about a magical car, written in 1961 for their only child Caspar, went on to become the well-loved novel and film, Chitty Chitty Bang Bang.
Fleming died of heart failure on 12 August 1964, aged fifty-six.
www.ianfleming.com