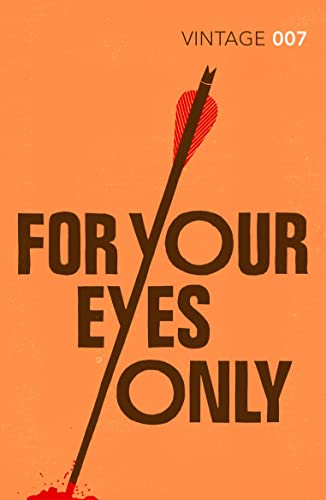 For Your Eyes Only
by Ian Fleming

Used Price
£7.19
New RRP £9.99
Free Shipping in the UK
From a View to A Kill * For Your Eyes Only * Quantum of Solace * Risico * The Hildebrand Rarity`Private armies, private wars. How much energy they siphoned off from the common cause, how much fire they directed away from the common enemy!'Five stories.
Reviews:
Trustpilot
Like New Very Good Good

For Your Eyes Only Summary

For Your Eyes Only by Ian Fleming

From a View to A Kill * For Your Eyes Only * Quantum of Solace * Risico * The Hildebrand Rarity `Private armies, private wars. How much energy they siphoned off from the common cause, how much fire they directed away from the common enemy!' Five stories. Five missions. Five glimpses into the mind of a spy. From Jamaican estates to brooding French forests, Bond is tested to his limits by the world's most dangerous men and the dark secrets they keep.

Customer Reviews - For Your Eyes Only

For Your Eyes Only Reviews

"Mr Fleming's licensed assassin is in good form... Few men can have been able to mix business with pleasure so successfully as Bond" * Times Literary Supplement *
"Exotic, resilient and potent" * Kirkus *
"Urbane savagery and mighty smooth tale spinning" * New York Herald Tribune *
"Good juicy violence... the girls as wild and luscious as ever" * The Times *

GOR008002736
For Your Eyes Only by Ian Fleming
Ian Fleming
James Bond 007
Used - Like New
Paperback
Vintage Publishing
2012-09-03
272
0099576945
9780099576945
N/A
Book picture is for illustrative purposes only, actual binding, cover or edition may vary.
The book has been read, but looks new. The book cover has no visible wear, and the dust jacket is included if applicable. No missing or damaged pages, no tears, possible very minimal creasing, no underlining or highlighting of text, and no writing in the margins.