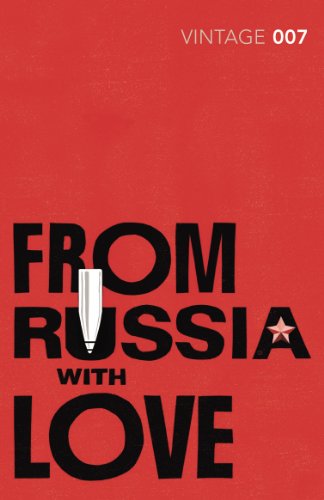 From Russia with Love
by Ian Fleming

Used Price
£3.19
New RRP £8.99
Free Shipping in the UK
`We are here to find a target who will fulfil our requirements. Someone who is admired and whose ignominious destruction would cause dismay'A beautiful Soviet spy. SMERSH has set an irresistible trap that threatens the entire Secret Service. In Fleming's fifth 007 novel Bond finds himself enmeshed in a deadly game of cross and double cross.
Reviews:
Trustpilot
Very Good Good Well Read

From Russia with Love Summary

From Russia with Love by Ian Fleming

`We are here to find a target who will fulfil our requirements. Someone who is admired and whose ignominious destruction would cause dismay' A beautiful Soviet spy. A brand-new Spektor cipher machine. SMERSH has set an irresistible trap that threatens the entire Secret Service. In Fleming's fifth 007 novel Bond finds himself enmeshed in a deadly game of cross and double cross.

Customer Reviews - From Russia with Love

From Russia with Love Reviews

"Mr Fleming's tautest, most exciting and most brilliant tale" * Times Literary Supplement *
"Mr Fleming is in a class by himself...immense detail, eleaborate settings and continuallymounting tension, flavoured with sex, brutality and sudden death" -- Anthony Price
"Adds the pleasures of a credible plot to the excitement of extreme violence. Highly polished...irresistible" * Sunday Times *