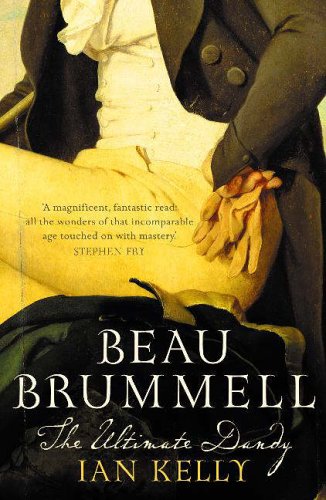 Out of Stock
In this fascinating new biography Ian Kelly reveals the man who changed the way we dress forever - and how his life reflects upon and has influenced our own 21st century culture.
Like New
Only 0 left

Beau Brummell's life is a riveting story of unparalleled fame, fashion and admiration followed by a descent into poverty and madness.

The man who put Saville Row on the map, who could win friends, political arguments or the favours of women with apparent effortlessness, and who was responsible for some of the wittiest put-downs in history, Brummell created the myth of the British gent typified by wit, style, sex, and the finest tailoring in the world. In this biography Ian Kelly brings the clothes, fashions and people of Regency England vividly to life.

Brummell's life is a mirror to his own age and also to our own. Part Andy Warhol, part David Beckham, part Oscar Wilde - Brummell became famous by virtue of his image at a time when the modern concept of 'celebrity' was first termed. This is the man with cause to be considered the father of the cult of personality - to be considered, indeed, as the first true 'celebrity'.

'Superlative . . . a thoughtful, absorbing and hugely diverting book. Besides an astute biography, we get a panorama of the times. Lushly illustrated, carefully researched and intelligently argued, this biography will entertain and enlighten.' * George Walden, Daily Mail *
A magnificent, fantastic read: all the wonders of that incomparable age touched on with mastery. * Stephen Fry *
'Finely written and beautifully illustrated.' * Frances Wilson, Literary Review *
'Lush, funny, exhaustively researched and beautifully written. Profound . . . The reader will want neither the book, nor the intriguing life it recreates, to come to an end.' * Herald *
'Splendid . . . What makes this book much more than just a relaxed, racy biography is the way its author brings to life not just the man but also the time in which he lived.' * The Sunday Times *
'Hugely readable' * James Dellingpole, The Times *
'Ian Kelly captures the sadness and frustration that lay behind the glamour; his book is elegant and scrupulously researched, with an admirable feeling for the age . . . sensitively narrated.' * Spectator *
'A wonderful melange of social history and biography. Vibrant, witty and fact-packed . . . something of a tour-de-force.' * Claire Harman, Sunday Telegraph *
'Beautifully illustrated . . . destroys the myths. This is the only book you need to read if you want to know the whole truth about Brummell.' * Telegraph *
'Ian Kelly's magisterial, utterly gripping life of George 'Beau' Brummell is parable for modern times . . . a vivid evocation of Georgian London.' * Philip Hoare, Independent *
'Exhaustive. Every detail of Brummell's career has been exhaustively researched with the skill of a professional historian.' * Scotsman *
'Kelly tells Brummell's tale chronologically and with empathy, in prose well worthy of his aesthetic subject: "Opalescent in its small perfection." Beautifully formed and dressed, this is biography at its best.' * The Times *

Ian Kelly is an actor, screenwriter and journalist, writing for The Times, Telegraph, Observer and TLS. His film credits include Howard's End, Attenborough's In Love and War and Dennis Potter's Cold Lazarus.

GOR010626970
Beau Brummell by Ian Kelly
Ian Kelly
Used - Like New
Paperback
Hodder & Stoughton General Division
2006-06-29
608
0340836997
9780340836996
Short-listed for Marsh Biography Award 2007
Book picture is for illustrative purposes only, actual binding, cover or edition may vary.
The book has been read, but looks new. The book cover has no visible wear, and the dust jacket is included if applicable. No missing or damaged pages, no tears, possible very minimal creasing, no underlining or highlighting of text, and no writing in the margins.