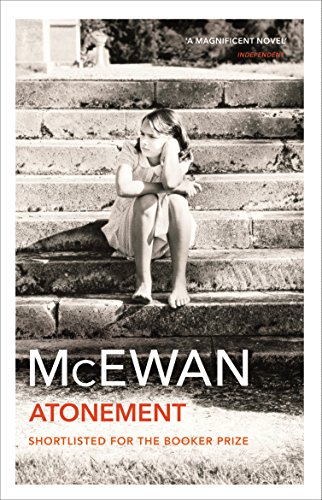 In Stock
£101.99
On the hottest day of the summer of 1935, thirteen-year-old Briony Tallis sees her sister Cecilia strip off her clothes and plunge into the fountain in the garden of their country house.
Like New Very Good
Only 1 left

On the hottest day of the summer of 1935, thirteen-year-old Briony Tallis sees her sister Cecilia strip off her clothes and plunge into the fountain in the garden of their country house. Watching her too is Robbie Turner who, like Cecilia, has recently come down from Cambridge. By the end of that day, the lives of all three will have been changed for ever, as Briony commits a crime for which she will spend the rest of her life trying to atone.

"A magnificent novel" * Independent *
"A superb achievement" * New York Times *
"The best thing he has ever written" * Observer *
"He is this country's unrivalled literary giant...a fascinatingly strange, unique and gripping novel" * Independent on Sunday *
"McEwan's best novel so far, his masterpiece" * Evening Standard *
"A beautiful and majestic fictional panorama" -- John Updike
"Subtle as well as powerful, adeptly encompassing comedy as well as atrocity, Atonement is a richly intricate book... A superb achievement" * Sunday Times *
"Atonement is a masterpiece...it is also an elegy to a time which, however volatile, still had certainties" * The Times *
"An evocative depiction of the dangers of innocence and ignorance in the face of uncomfortable reality." * Herald *
"Brilliantly explores the currents of guilt, shame and anger... Utterly satisfying, complete" * Scotsman *
"A complex, thought-provoking novel." -- Fanny Blake * Woman and Home *
"Smoulders with slow-burning menace" * The Times *

Ian McEwan is the critically acclaimed author of seventeen books. His first published work, a collection of short stories, First Love, Last Rites, won the Somerset Maugham Award. His novels include The Child in Time, which won the 1987 Whitbread Novel of the Year Award; The Cement Garden; Enduring Love; Amsterdam, which won the 1998 Booker Prize; Atonement; Saturday; On Chesil Beach; Solar; Sweet Tooth; The Children Act; and Nutshell, which was a Number One bestseller. Atonement and Enduring Love have both been turned into award-winning films, The Children Act and On Chesil Beach are in production and set for release this year, and filming is currently underway for a BBC TV adaptation of The Child in Time.

GOR008670795
Atonement by Ian McEwan
Ian McEwan
Used - Like New
Paperback
Vintage Publishing
2002-05-02
384
0099429799
9780099429791
Winner of WH Smith Literary Prize 2002 Winner of Commonwealth Writers' Prize Best Book - Eurasia 2002 Short-listed for WH Smith Book Awards (Fiction) 2002 Short-listed for Whitbread Prize (Fiction) 2001 Short-listed for Booker Prize for Fiction 2001
Book picture is for illustrative purposes only, actual binding, cover or edition may vary.
This is a used book - there is no escaping the fact it has been read by someone else and it will show signs of wear and previous use. Overall we expect it to be in very good condition, but if you are not entirely satisfied please get in touch with us.