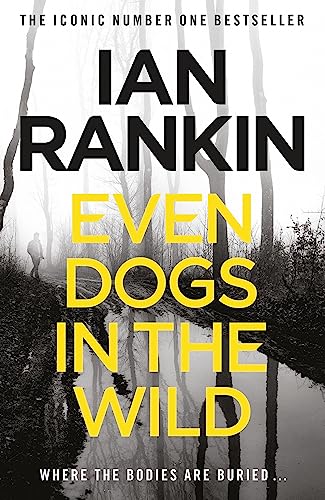 Even Dogs in the Wild
by Ian Rankin

Even Dogs in the Wild Summary

Even Dogs in the Wild: The No.1 bestseller (Inspector Rebus Book 20) by Ian Rankin

Retirement doesn't suit John Rebus. He wasn't made for hobbies, holidays or home improvements. Being a cop is in his blood.

So when DI Siobhan Clarke asks for his help on a case, Rebus doesn't need long to consider his options.

Clarke's been investigating the death of a senior lawyer whose body was found along with a threatening note. On the other side of Edinburgh, Big Ger Cafferty - Rebus's long-time nemesis - has received an identical note and a bullet through his window.

Now it's up to Clarke and Rebus to connect the dots and stop a killer.

Even Dogs in the Wild brings back Ian Rankin's greatest characters in a story exploring the darkest corners of our instincts and desires.

Even Dogs in the Wild Reviews

'Taut, dark and expertly crafted tale has plenty to satisfy the most exacting Rebus fan.' * GUARDIAN *
'Delightful, impossible-to-fault crime writing from a virtuoso of the craft.' * DAILY MAIL *
'EVEN DOGS IN THE WILD is a complex, twisty tale expertly told by Rankin.' * EVENING STANDARD *
'Pacy, engaging, smart, ingenious, excellently riddled and raddled - what's not to like about Rebus?' * SCOTLAND ON SUNDAY *
'A chewy, satisfying, thrilling read with a giant narrative switchback when you least expect it.' * METRO *
'A very welcome return to the beat for one of crime fiction's best detectives.' * SUNDAY MIRROR *
'A brilliant read, Rebus is back where he belongs and still working by his own rules. A must for all Rebus fans.' * WOMAN'S WAY *
'A treat for Rankin fans as favourite characters are re-united in this darkly moody crime masterpiece.' * PETERBOROUGH EVENING TELEGRAPH *

GOR007562397
Even Dogs in the Wild: The No.1 bestseller (Inspector Rebus Book 20) by Ian Rankin
Ian Rankin
A Rebus Novel
Used - Very Good
Paperback
Orion Publishing Co
2016-06-16
416
1409159388
9781409159384
N/A
Book picture is for illustrative purposes only, actual binding, cover or edition may vary.
This is a used book - there is no escaping the fact it has been read by someone else and it will show signs of wear and previous use. Overall we expect it to be in very good condition, but if you are not entirely satisfied please get in touch with us.