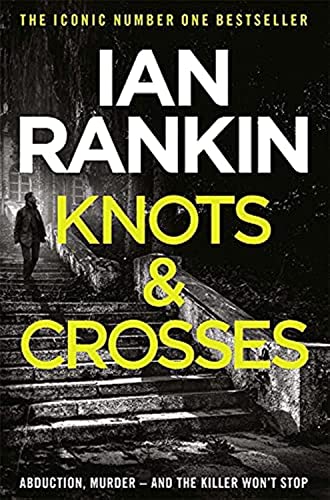 Knots And Crosses
by Ian Rankin

The very first Rebus novel from the No.1 bestselling author of IN A HOUSE OF LIES.
'Britain's best crime novelist' Express

Knots And Crosses by Ian Rankin

Discover how it all began in the very first Rebus novel from 'Britain's No.1 crime writer' Daily Mirror

'And in Edinburgh of all places. I mean, you never think of that sort of thing happening in Edinburgh, do you...?'

'That sort of thing' is the brutal abduction and murder of two young girls. And now a third is missing, presumably gone to the same sad end. Detective Sergeant John Rebus, smoking and drinking too much, his own young daughter spirited away south by his disenchanted wife, is one of many policemen hunting the killer.

And then the messages begin to arrive: knotted string and matchstick crosses - taunting Rebus with pieces of a puzzle only he can solve.

GOR001319438
Knots And Crosses by Ian Rankin
Ian Rankin
A Rebus Novel
Used - Very Good
Paperback
Orion Publishing Co
2008-08-01
272
0752883534
9780752883533
N/A
Book picture is for illustrative purposes only, actual binding, cover or edition may vary.
This is a used book - there is no escaping the fact it has been read by someone else and it will show signs of wear and previous use. Overall we expect it to be in very good condition, but if you are not entirely satisfied please get in touch with us.